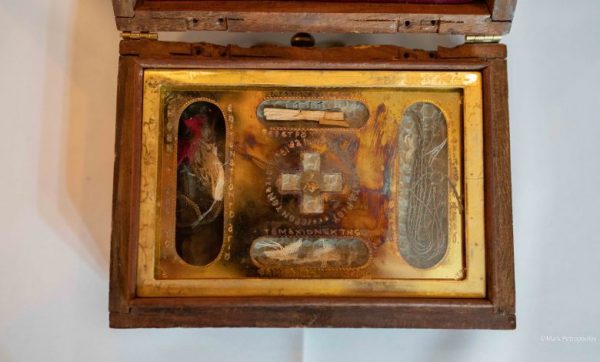 On Monday evening, 8th November, His Eminence Archbishop Makarios of Australia officiated at the Festal Vespers for the feastday of Saint Nektarios the Wonderworker, Bishop of Pentapolis, at the celebrating parish in Wollongong, NSW. The faithful flocked to church with feelings of deep emotion as this was the first celebration of the commemoration of Saint Nektarios after the reinstatement of the Parish-Community to ecclesiastical canonicity. Moreover, the faithful had the added blessing of venerating a portion of their Patron Saint’s holy relic that was donated to the Wollongong Parish by His Eminence. More precisely, the reliquary offered by His Eminence to the parish, in addition to the fragment of the holy relic of Saint Nektarios, also contained a small piece of wood from the saint’s coffin, two pieces from his vestments and a small piece of his singlet, with which the saint’s first miracle happened at the Aretaieion Hospital. “Come and venerate with great reverence and beseech Saint Nektarios for whatever you want”, His Eminence urged the congregation, and hoped that the Saint may bless the pious believers, shelter their families and help the Wollongong Parish progress from glory to glory. Much of the Archbishop’s speech was about the life and miracle-workings of Saint Nektarios. His Eminence briefly presented the significant events from the saint’s life, from the time of his birth in Silivria of Eastern Thrace until his repose at the Aretaieion Hospital of Athens. He particularly focused on the great spiritual battle that the saint was called to wage on account of the envy and slander he confronted both in Alexandria and in Greece.

“Envy and slander go together,” His Eminence concluded and noted, “when one envies a person, he sees everything wrong and begins to accuse, criticise and denigrate. Saint Nektarios confronted this terrible, demonic duo of envy and slander,” he highlighted while meaningfully concluding that of those who accused him and expelled him from the Patriarchate of Alexandria, eagerly awaiting the office of Patriarch for themselves, in the end, none of them managed to achieve their goal.