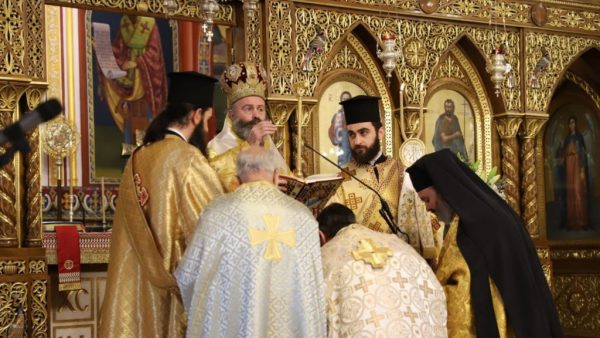 Archbishop Makarios of Australia attended the festivities at St Nektarios Church in Sydney on Sunday, 6 September, to celebrate a historic milestone for the parish.

On 6 September, 1970, the church was officially handed over to the Greek Orthodox community of Burwood. Initially, a church for Methodists, the handover ceremony in 1970 included a doxology service by the late Archbishop Ezekiel, who three years earlier had given his blessing for the creation of a committee to find a suitable place for the purchase or construction of a church so the Greek Orthodox people living in the area could attend a nearby church.

Fifty years later, the church of St Nektarios continues to be a place of refuge and guidance for Orthodox Christians in the area. Archbishop Makarios was present at the anniversary along with the President of the Parish-Community and members of the Board of Directors were among those present, as well as members of the Philoptohos Association, but also two members of the committee that was founded in 1967 – Peter Kariatlis, who was the first treasurer of the Parish-Community, and James Soulos, son of the first president, the late Andrew Soulos.

At the end of the Divine Liturgy, His Eminence addressed the congregation and made the point that the 50th anniversary of the founding of the Parish of St Nektarios is not only a celebration for the local parishioners but also a celebration for the entire Holy Archdiocese of Australia. He then expressed his gratitude to those who worked hard, offered money and devoted effort and time for the acquisition of the Holy Parish of St Nektarios and for its future progress. He did not fail to mention his predecessor, Archbishop Ezekiel, as well as the late Fr Ezekiel Petritsis who had helped in the church’s creation and development.

“I praise God that our Holy Archdiocese, here in Sydney, has a church dedicated to St Nektarios,” he said and emphasised that he is a contemporary saint, who is very dear to the hearts of the people and who has performed and continues to work countless miracles for those who call upon him with faith. Furthermore, he explained that although St Nektarios is not considered to be a martyr of our Church, he lived a life that can be characterised as a martyrdom, as he was tormented by people who constantly slandered him. Concluding the reference to the life of the saint, he urged the faithful to learn from his patience, love, forgiveness and prayerful manner and to follow the same path, granting beauty and fragrant words not only to the Church but also to the broader society.

During the Divine Liturgy, Archbishop Makarios raised the Parish Priest, Fr George Liangas, to the rank of Spiritual Confessor. Taking occasion from Fr George’s address, which referred to the Jubilee anniversary, His Eminence reminded the people that during this year, every 50 years, the slaves were freed and their debts forgiven. Therefore, he urged Fr George, in every confession he hears, to free the people from their spiritual debts and the bondage of sin and to lead them to the Kingdom of Heaven. The Archbishop expressed the certainty that he will succeed as Fr George is a spiritually cultivated person.