A Tale of a Misplaced Kettle 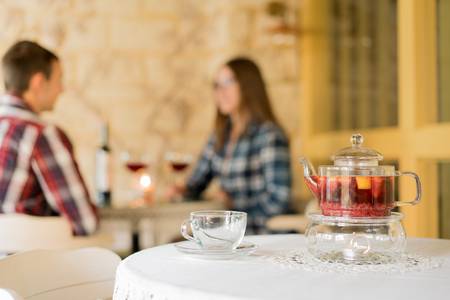 My journey to Orthodoxy was rather gradual. There wasn’t any major life event that made me run to church unlike in lives of some people who turned to God after they became diagnosed with some serious illness or encountered another similar adversity. I was perfectly healthy and happy at that time. I did have a few struggles, but they weren’t strong enough for me to undergo some dramatic transformation. My husband and I were simply looking for a place to baptize our daughter and came across one particular church in Toronto. Then one thing led to another, and I started reading about Orthodoxy and attending liturgies. I learned about the importance of role of communal prayer and the holy sacraments. Within a few months, I had my first real Lent and Easter.

Joining a Christian community entailed several adjustments. I had to integrate prayers and services into my schedule and make room for yearly fasts. But above all, I met new people and began forging new relationships, which pulled me out of my comfort zone. I’ve always been a loner, but now I had to make more connections. As I became drawn deeper into this church community, I began learning more about the lives of the congregants. Oftentimes, we would be asked to pray for someone who was undergoing a difficult time in life—a sick child, and elderly person, or a person with financial difficulties. Then we would pray for each other during happy times, too.

We would also meet together at the church once or twice a week, depending on our schedules. We would have brunches after liturgy services, where we would discuss everything, from the matters of faith to simple daily life challenges. Slowly, this community began to feel like a second family.

Recently, something wonderful happened that brought the community experience on a whole different level.

My husband and I made pilgrimage to a church located in another province. It was the Church of St. Seraphim of Sarov in Rawdon, QC. A very beautiful, golden-domed church located in the picturesque countryside of Quebec province. Although the pilgrimage was organized by a sister parish, it attracted some congregants from our church. We stayed in an old inn located an hour-drive from the actual place.

On the Sunday morning before our departure, something unexpected happened. In a hurry to get to the liturgy on time, my husband and I forgot our kettle in the communal kitchen of our hotel. It was a very old kettle with a broken lid, and the only reason we brought it was because we knew there would be no coffee/tea maker in the room. So when we discovered that it was left behind, we both decided it wasn’t a big deal. Naturally, we had a brief “I told you to take it with the rest baggage” moment, but we got over it very quickly. Such things happened during trips all the time, and we try not to dwell on them.

Two weeks later, I ran into a woman who was part of the pilgrimage group. We often see each other during liturgies, and sometimes, I help to keep an eye on her boys, but we aren’t particularly close. I learned that she, along with the lead organizer, had salvaged the kettle and brought it back to Toronto all the way from Quebec. She also told me that the candle lady would have it available for a pickup the next week. So it turned out that there were actually three people involved in bringing back our old, half-broken kettle (four if you count the hotel owner)!

Like I’ve mentioned, losing this kettle was no big deal. We have a fully functioning one at home. Yet this random act of kindness made the entire pilgrimage experience particularly special. It was quite heartwarming to find out that they took care to bring back something as small as an old kettle. This experience reinforced my faith in people and in the power of a community. Sometimes, it’s these random acts of kindness that make you realize that small things do matter in our lives.