About 300,000 People Participate in Religious Procession in Kiev 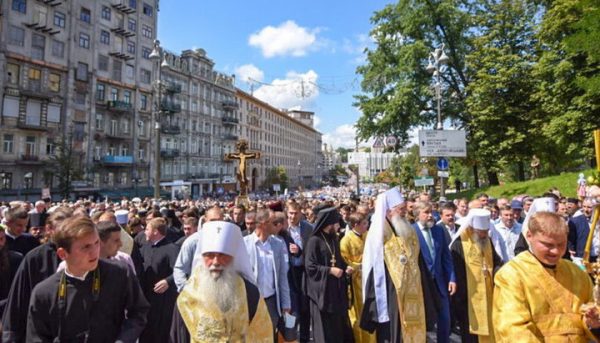 On July 27, 2019, a religious procession of the Ukrainian Orthodox Church on the occasion of the 1031st anniversary of the Baptism of Rus was held in Kiev. About 300,000 pilgrims took part in the cross procession, reported the UOC Chancellor, Metropolitan Anthony (Pakanich) of Borispol and Brovary.

According to him, not only Ukrainians but also pilgrims from abroad, in particular, the parishioners of the Romanian Orthodox Church, participated in the cross procession.

The great religious procession on the occasion of the 1031th anniversary of the Baptism of Rus, showed the loyalty of the Ukrainian people to the choice of Holy Equal-to-the-Apostles Prince Vladimir and the canonical Church, stressed the chancellor.

“Everyone who takes part in a cross procession testifies to the world and God about their allegiance to the canonical Ukrainian Orthodox Church. It is very difficult to say how many people walked in the procession this year. But we can see that there were definitely far more believers than last year,” the Information and Education Department of the UOC conveyed the words of Metropolitan Anthony. “According to our approximate estimates, there were about 300,000 participants. This is really a large number of people, which testifies to the loyalty of the Ukrainian people to the choice once made by the Holy Prince Vladimir.”

The Great Cross Procession united completely different people not with political slogans, but with heartfelt prayer for Ukraine and its people, His Eminence Anthony noted.

“We were participants of a big event, which, although repeated every year, is experienced in a special way every time. This is a procession dedicated to the Day of the Baptism of Rus and takes place on the eve of the holiday in honor of Prince Vladimir Equal-to-the-Apostles. These are really special feelings when people of different age and walks of life come from different regions of our homeland, their mouths pronouncing not political slogans, but prayer – a heartfelt prayer for their native land, for their people, and for their Orthodox Church,” he concluded.