Over 20,000 Believers Go in a Procession from Kamenets-Podolsky to Pochaev 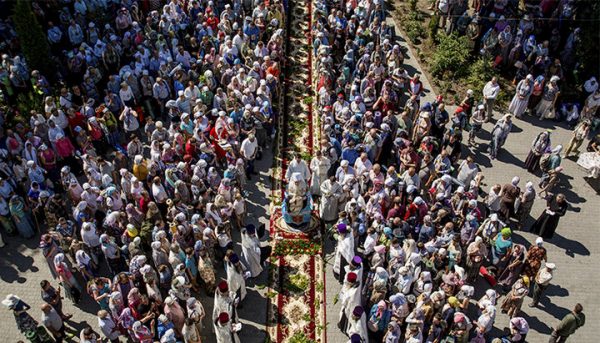 On August 19, 2019, from the ancient church in honor of the Nativity of the Most Holy Theotokos in the village of Dolzhok of Kamenets-Podolsky, a traditional procession of many thousands took place.

“Our procession has been setting off from this church for more than 200 years,” said a source from the Union of Orthodox Journalists.

Reportedly, the procession began with a prayer service for pilgrims, after which at 14:00 the clergy and believers made for the Holy Assumption Pochaev Lavra.

According to estimates of law enforcement officers accompanying the religious procession, more than 20,000 believers took part in it.

“There are people from all over Ukraine and even from the uncontrolled territories of Donbass. I encountered people from Australia here, pilgrims from Belarus, Russia, Moldova, Georgia,” our source shared with the UOJ correspondent.

The cross procession is supposed to arrive at the Lavra on Sunday, August 25, 2019.

In 2017-2018, about 20,000 people also took part in the cross procession from Kamenets-Podolsky to Pochaev. “All of our people and our Church throughout all these years have been praying so that the Lord will enlighten people’s minds, that people humble themselves and the long-awaited peace and harmony necessary for the basic prosperity and development of society will be established,” said Metropolitan Theodore.