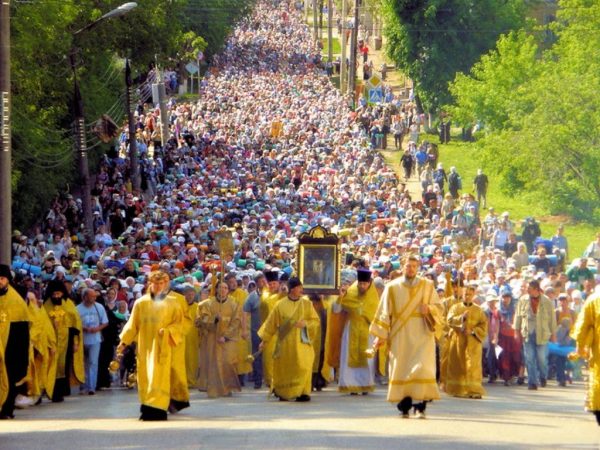 Moscow, July 26, Interfax – Highways leading to Kiev, where a major religious procession will be held this Friday to mark the 1030th anniversary of the Baptism of Rus, are being blocked to pilgrims from the Nezhin and Odessa dioceses of the Ukrainian Orthodox Church, the Church’s press service said.

According to the dioceses, drivers are forced to decline to give rides to believers who want to join the religious procession in Kiev because they fear the threats of state authorities and radical nationalists.

In the Nezhin Diocese, which brings together parishes in the southeast of the Chernigov Region, members of the nationalistic organization Svoboda warned local private carriers that they will burn their buses if they deliver Ukrainian Orthodox Christians to Kiev to attend the religious procession on July 27, the Press Service said.

The Odessa Diocese is also concerned that pilgrims cannot get to Kiev.

“There are one thousand people who are willing to go there. We began to turn to transport organizations, but neither the first one, nor the second one, nor the third one agreed to help us,” the spokesman of the Odessa Diocese Archpriest Sergy Lebedev said.

It has been reported that state officials are preventing believers from attending the religious procession, including by means of threats to private carriers in the Zaporozhye, Zhitomyr, Rovno, and other regions.

Most viewed articles
Blasphemous and Obsessive Thoughts Come Into My Mind. What Do I Do?158
An Extraordinary Session of the ROCOR Synod of Bishops Convenes113
Funeral Services for His Eminence Metropolitan Hilarion of Eastern America and New York81
Is God a Fool?74
How to Respond to Opposition to the Gospel64
Metropolitan Joseph, Bishop Thomas Celebrate Centennial of Little Falls Parish56
A Piece of Rock Falls Down on the Skete of St. Anna on Mt. Athos48
PRAY: 14 Students, One Teacher Dead After Texas Elementary School Shooting43
His Beatitude Metropolitan Tikhon Issues Statement on Tragic School Shooting in Texas35
Most popular authors
Pravmir.com team242
Fr. Eugene Murzin158
Archpriest Stephen Freeman74
Archpriest Basil Ross Aden64
Subdn. Peter Samore56
Associated Press43
Metropolitan Tikhon of All America and Canada35