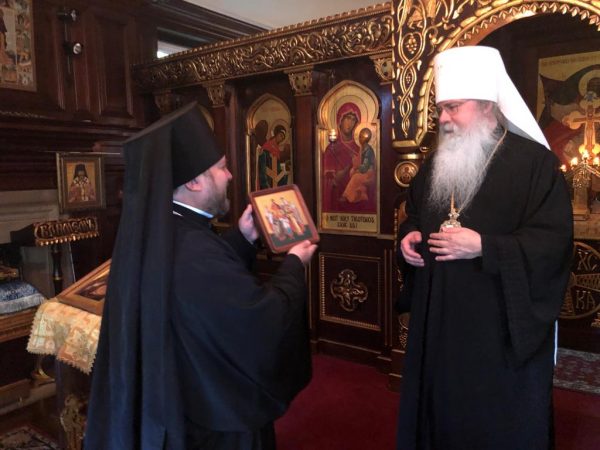 On September 25, 2019, Bishop Matthew of Sourozh, acting administrator of the Patriarchate Parishes in America, began his working visit to the United States of America.

On the first day of his visit, he called on the administrative center of the Orthodox Church in America in Syossete to meet with His Beatitude Tikhon, Archbishop of Washingon and Metropolitan of All America and Canada. The hierarchs prayed and partook of the Holy Gifts during the Divine Liturgy at the church of St. Sergius of Radonezh whose memory was celebrated on that day according to the new calendar.

After the service, Bishop Mathew warmly greeted His Beatitude Tikhon, the clergy and staff of the administrative center on the occasion of the patronal feast. The archpastor read out messages of greetings from His Holiness Patriarch Kirill and Metropolitan Hilarion of Volokolamsk, head of the Moscow Patriarchate department for external church relations, on the occasion of the forthcoming name day and presented His Beatitude an icon of the Royal Passion-Bearers and a bouquet of flowers.

During a talk, which was held in a warm fraternal atmosphere of mutual understanding, they discussed the cooperation of the two Churches and pressing issues of inter-Orthodox interaction. They also dealt with preparations for the next year commemorative events devoted to the 225th anniversary of the Orthodox mission initiated by Valamo monks in North America and the 50th anniversary of the Russian Orthodox Church’s granting autocephaly to the Orthodox Church in America.