Source: OCA
Metropolitan Tikhon of All America and Canada | 28 September 2018 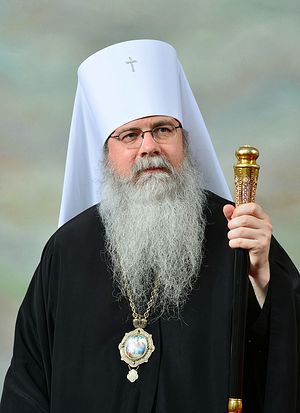 The text of the letter, which reads as follows, is also available in PDF format.

Archpastoral Letter of His Beatitude, Metropolitan Tikhon
in Reference to Recent Developments
Regarding the Orthodox Church in Ukraine

To the Clergy, Monastics, and Faithful of the Orthodox Church in America:

Christ is in our midst!

I write in reference to recent developments respecting the Orthodox Church in Ukraine which have received much media attention. The Holy Synod of Bishops of the Orthodox Church in America has been closely following these developments inasmuch as they have an impact in our own communities. Many of our parishes have been affected by the painful historical ecclesiastical divisions that have existed in Ukraine for decades. In recent years, these ecclesiastical divisions have been overtaken by significant violent geopolitical conflict and our Church has consistently called for the offering of prayers for the healing of such division and the peaceful and just resolution of all conflict.

Our Holy Synod has been apprised of initiatives by His All-Holiness, Ecumenical Patriarch Bartholomew, to address this painful situation and has noted the various preliminary responses offered by other Orthodox Churches. In particular, we have received with sorrow, yet with understanding, the decision of the Moscow Patriarchate to cease liturgical commemoration of the Ecumenical Patriarch and suspend concelebration and participation by bishops of the Moscow Patriarchate in inter-Orthodox contexts.

We are deeply aware of the pain and trauma in the life of Orthodox people caused by ecclesial schism which weakens Orthodox witness and evangelism in society. Such pain and trauma have been wounds in the life of Orthodox Christians in Ukraine for several decades. Schism, division, and mutual antagonism are not only canonical problems—they are pastoral and spiritual challenges demanding the healing power of Christ and Christian faith. We are mindful of the Russian Orthodox Synod’s call to the local autocephalous Churches to “understand the common responsibility for the fate of world Orthodoxy and to initiate a fraternal all-Orthodox discussion of the church situation in Ukraine.”

The Holy Synod of Bishops of the Orthodox Church in America supports the need for regular dialogue at every level and appeals to all local Orthodox Churches to address the current crisis in Ukraine through the convening of a Pan-Orthodox synaxis, or similar conciliar process, wherein an authentic solution can be found to this problem. We are prepared to participate in such fraternal discussions and will be reviewing the on-going developments of this situation at our Fall Session.

In the meantime, we call on our clergy, monastics, and faithful to offer their support and fervent prayers for His Beatitude, Metropolitan Onufry, and all the bishops, clergy, monastics, and faithful of the canonical Ukrainian Orthodox Church. May the Lord grant them continued strength and wisdom in their endeavor to “keep the unity of the Spirit in the bond of peace” (Ephesians 4:3). Relying on the healing power of Christ, we exhort all in the Orthodox Church in America to be steadfast in faith, hope, and love, maintaining collaboration and eucharistic communion with both the Ecumenical Patriarchate and the Patriarchate of Moscow, thus offering a sign of unity in the face of current threats to unity.

May our Lord Jesus Christ, the Chief Shepherd, through the inspiration of the Holy Spirit, the Comforter and Spirit of Truth, grant to all parties the wisdom, peace, and humility to solve the problems that exist in Ukraine, so that working in unity all may turn their energy and attention to the singular and true mission of the Church, the preaching to the world of the Gospel of Jesus Christ

+ Tikhon
Archbishop of Washington
Metropolitan of All American and Canada

Yesterday, we witnessed, once again, another instance of terrible and absurd evil perpetrated against the most vulnerable of…

To the Clergy, Monastics, and Faithful of the Orthodox Church in America, Dear Beloved Children in the Lord,…

“It is good to give thanks to the Lord, to sing praises to Thy name, O Most High”…