Active phase of warfare in Syria to end within a year, Assad says

Source: Axis o fLogic
According to the Syrian president, there was no conflict among religions in his country, but there was a conflict between people of all confessions and gunmen.
Natalya Mihailova | 08 April 2014
Moscow, April 07. /ITAR-TASS/. The Syrian president was quoted on Monday as saying the active phase of warfare in Syria would be finished within a year. 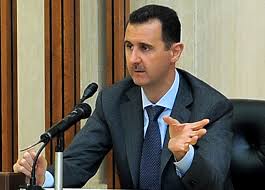 “We once again focused on economic cooperation,” the chairman of the Imperial Orthodox Palestine Society, Sergei Stepashin, said in comments on recent talks with Syrian President Bashar al-Assad.

“In reply to my question about military affairs, Assad said, ‘The active phase of warfare in Syria will be finished within a year’,” Stepashin told a news conference. “Then we will have to proceed to what we have been doing all the time – fight against terrorists, Shakhids,” he quoted the Syrian leader, adding that the talks had focused mainly on economic cooperation.

“Can economic cooperation be discussed [in conditions of warfare]? Yes, it can, because it is difficult to fight fire with fire for three years without the economic injection,” Stepashin said. ”I informed the Russian government that the intergovernmental commission must be restored,” Stepashin said.

“Assad is in an excellent shape. He does not have a shadow of doubt as to what he is doing. He asked to tell President Vladimir Putin ‘I am not a Yanukovich type of person’,” Stepashin said at the news conference.

“Security measures [in Damascus] are well planned, checkpoints are in place. There are no enemies inside Assad’s team, his relatives are not selling medicines, but are in the war. And the population knows this,” he added.

According to the Syrian president, there was no conflict among religions in his country, but there was a conflict between people of all confessions and gunmen. Humanitarian aid from the Imperial Orthodox Palestine Society confirmed this, said its chairman Stepashin.

“During our meeting, Bashar al-Assad noted that we had very well succeeded in demonstrating that the war was not between Muslims and Orthodox Christians, but between gunmen and people of different nationalities and belief,” he said. Stepashin also said that humanitarian aid brought to Syria – medicines, medical equipment, foodstuffs and clothing, – had been bought on money raised on a voluntary basis. “Not a penny from the budget – that was our task,” he said.

“I had not expected such a positive reaction from Russian citizens. Where Syria is and where is Russia — one would think,” Stepashin said.