“More Than an Activist” – Metropolitan Philipp on his final journey 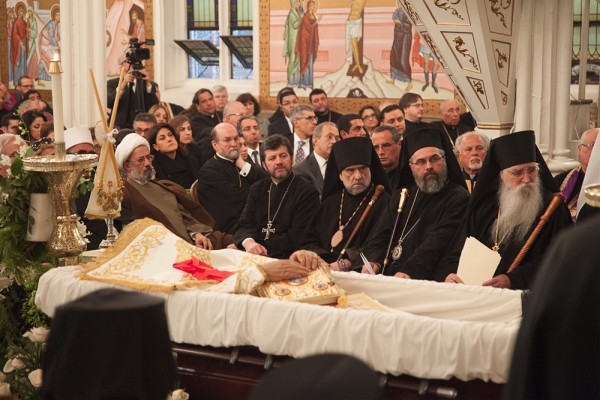 With the blessing of His Eminence Hilarion, Metropolitan of Eastern America and New York, a delegation from the Russian Church Abroad, led by diocesan vicar Bishop George of Mayfield, attended the funeral of the reposed hierarch. His Grace passed along Metropolitan Hilarion’s condolences to the Locum Tenens of the Antiochian Archdiocese, Metropolitan Silouan of Buenos Aires and All Argentina, the episcopate, clergy, and faithful of the Antiochian Church in America.

The service for the departed, which was performed in English and Arabic, was led by Metropolitan Silouan, co-served by 14 hierarchs of the Antiochian Church in the USA, Canada, and Latin America. Many hierarchs came to honor his memory and offer their condolences to the orphaned Antiochian flock – members of the Assembly of Canonical Orthodox Bishops of North and Central America: the chairman of the Assembly, Archbishop Demetrios (Greek Orthodox Archdiocese of America), Metropolitan Tikhon (Orthodox Church in America), Metropolitan Anthony (Ukrainian Orthodox Church of the USA), Archbishop Justinian (Administrator of the Patriarchal Parishes in the USA (MP)), Bishop Ioan Casian (Vicar of the Romanian Archdiocese in the Americas), and Bishop Michael (OCA). Also taking part was His Grace, Bishop Jerome (ROCOR), and a multitude of clergy from the several Orthodox jurisdictions, representatives of the Armenian and Coptic Orthodox Churches, heads of the Syrian and Lebanese diplomatic missions, and Syria’s permanent representative to the UN.

On this rainy day, the main cathedral of the Antiochian Church in America was filled with hundreds of people – friends and relatives of the departed, clergy, people of various nationalities, backgrounds, and ages, who through the Lord’s providence, labors, and life circumstances got to know this wise, steadfast, hardworking, pious, humble, and radiant man over the course of Metropolitan Philip’s 48 years of archpastoral service.

It is thanks to his wisdom and dynamic personality that the one Antiochian Archdiocese in America now numbers over 250 parishes. Thanks to the openness of the Antiochian Archdiocese and Syedna (Master, Vladyka) Philip personally, a multitude of Americans, Chinese, and people of many ethnicities found within a spiritual home, coming to Christ and even receiving clerical ordination. The Metropolitan ordered his missionary work and preaching in such a way that Orthodoxy might integrate as naturally as possible into the lives of the people living in America in particular and in the West as a whole. He oversaw the creation of missionary, benevolent, academic, and educational organizations, which today operate on a level of Pan-American Orthodoxy, both beyond the borders of the U.S. and under the aegis of the Episcopal Assembly. It was through these organizations that Metropolitan Philip attracted more than one generation of women to missionary service, thereby elevating their role in the life of the Antiochian Church in America.

Though having spent the majority of his life in America, Metropolitan Philip remained a son of Antioch until the end of his days. In his heart resided ancient Balamand, with its monastery and seminary, through which passed many of the Metropolitan’s students and spiritual children, who therein acquired the language and church traditions of their fathers. His heart ached for the fates of Syria and Lebanon, places rarely touched by peace. Thousands of miles from his homeland, even here he sought out and approached those with the authority to make decisions on an international scale. Archbishop Demetrios, head of the Greek Orthodox Archdiocese, who knew Metropolitan Philip for over 40 years, recalled an instance when the hierarchs were invited to the White House to meet with President Bush. Metropolitan Philip tried his utmost to express to the Head of State the situation facing his compatriots in Syria and Palestine, to resolve their plight at the highest level.

Archbishop Demetrios noted another – and very important – trait of Metropolitan Philip’s: “He was more than an activist – he was a spiritual person, who overcame obstacles through prayer. For him, the most important thing was how something would look in the eyes of God. He was dedicated to God and felt an absolute responsibility to Him.”

Metropolitan Silouan of Buenos-Aires and All Argentina read aloud a letter of condolence from Patriarch John X of Antioch and, on behalf of the Patriarch, posthumously awarded Metropolitan Philip the Antiochian Orthodox Church’s highest award – the Medal of Sts. Peter and Paul, founders of the Church in Antioch.

A majority of the eulogies delivered by the Orthodox that day touched on the subject of Holy Pascha; it could be no other way. Metropolitan Philip was a servant of God, awaiting Christ’s Radiant Resurrection, as well as a charismatic figure. The latter was not so much a crown as a cross, which placed on him an enormous responsibility before God and man. He had what is known as an “inner core:” he had an iron will, and a tireless will to serve, to work, and to inspire others by his own example. He had another precious trait, one often so hard to find: he could talk to anyone on his own level. He was hospitable. He knew how to bestow love.

Syedna Philip loved this cathedral and always served in it on holy days and great feasts. He would make his way downstairs to the refectory where, as fate would have it, only several days ago Bishop Nicholas of Brooklyn received word of the Metropolitan’s repose. Today the church building, acquired from the Episcopalians in 1920, seems perhaps not as grand as the great Antiochian cathedrals erected in recent years throughout America. But this cathedral, this firstling, was dear to the Metropolitan. Here are preserved part of the relics of the first Antiochian missionary in America – Saint Raphael of Brooklyn. The holy hierarch’s remains are kept at Antiochian Village in Pennsylvania, where the newly departed will be buried, as well. On Monday, March 31, laid alongside a saint, Metropolitan Philip will find eternal rest.