Aid collection for those suffering in Syria continues 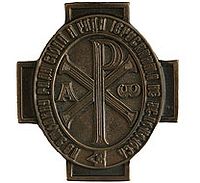 The emblem of the Imperial Orthodox Palestine Society

With the blessing of His Holiness Patriarch Kirill of Moscow and all the Russia, the Imperial Orthodox Palestine Society collected humanitarian aid for Syria on March 31 through April 10, 2013. The initiative met with an immediate response from Muscovites. Those suffering from the war in faraway Syria were brought bandages, food, children’s food, stationery and gifts of money. Collection boxes have been put up in monasteries at aid collection sites. The humanitarian aid, collected in Russia, will be sent to Syria and given to His Grace the Patriarch of Antioch and all the East John X and also to the Grand Mufti of Syria Ahmad Badreddin Hassoun.

On November 28, 2012, His Holiness Patriarch Kirill of Moscow and all Russia who is the headof the Honorable Members’ Committee of the Imperial Orthodox Palestine Society, speaking at the meeting of the IOPS Council, called for collection of humanitarian aid for Syrian Christians. On March 21, 2013, a meeting between the Patriarch and Metropolitan George of Holms, who had arrived from Syria, took place, after which practical realization of the project began.

In Syria, currently seized by war, militants are systematically destroying Christianity. On March 29, 2013, Bishop Luke of Seidnaya, a hierarch of the Orthodox Church of Antioch, told the media about the catastrophic situation of Syrian Christians. He said to date, 138,000 Christians had been banished from their homes. Christian Churches are systematically destroyed and people are killed. “Damage, done to our Churches, is great. They are burned, plundered, their walls are broken. If a human life is of no value for these criminals then will they spare our shrines? Our parishioners are beaten up and attacked. All this is obtaining “legal status” because the uprising is happening and nobody is protesting against it,” notes the Hierarch. Thus, in the city of Homs, extremists have committed mass murder of Christians. Hundreds of people have been killed. A Similar picture can be seen in other regions of Syria as well.

Other media have reported that the humanitarian crisis in Syria is indeed critical, with little help coming.

Aljazeera reports that G8 foreign ministers meeting in London have said they are “appalled” by the rising death toll of more than 70,000 in the Syrian conflict and that there are now more than a million Syrian refugees registered by the UNHCR in neighboring countries, and more than two million internally displaced persons in Syria. They have urged all countries to boost contribution to a UN aid appeal for the country.

Concerning refugees, the UN News Centre reported on April 9 that the UNHCR Regional Coordinator for Syrian Refugees Panos Moumtzis has told a news briefing in Geneva: “We feel we have reached a breaking point,”warning that with aid agencies providing just the bare minimum the shortfall was likely to expose the refugees, especially women and children, to exploitation as they try to provide for their families. UNICEF has also stated that funds are running out to provide assistance to children in Jordanian refugee camps with even the bare essentials, like water. This would inevitably lead to a serious rise in deaths from dysentery and other illnesses.

However, the G8 foreign ministers have made no mention of supplying arms to the rebels as the opposition has demanded, saying only that there should be greater “humanitarian” assistance for those caught up in a conflict that is now in its third year.

In a statement issued by the ministers on Thursday after wrapping up two days of talks, they “expressed deep concerns about the increasing human tragedy of the conflict in Syria”.

“They called on all countries to join with them in maximizing their contributions to the latest UN appeals and to provide them with direct support in order to help them face this challenging situation.”

British Foreign Secretary William Hague has admitted that too little has been done to remedy the humanitarian crisis because the UN is divided on how to address the conflict.