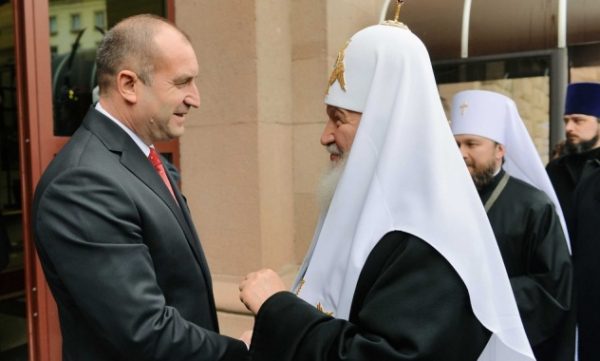 March 3, 2018 – During his visit to Bulgaria, timed for the celebrations marking the 140th anniversary of the liberation of Bulgaria from the Ottoman yoke, His Holiness Kirill, Patriarch of Moscow and All Russia, met with President Rumen Radev. His Holiness Patriarch Neophyte of Bulgaria joined their talk.

President Radev met His Holiness and his delegation at the entrance to his residence. He warmly welcomed Patriarch Kirill, stressing that the Bulgarian side gave a high value to the Patriarch’s visit and his participation in the national celebrations and that the Russian and Bulgarian Churches played a great role in the age-old cultural relations between the two countries.

Speaking in response, Patriarch Kirill said, ‘I considered it necessary to be here in these days because the heroic struggle of the Russian and Bulgarian people for the liberation of Orthodox Bulgaria is a special page in the history of our nations’ and stressed ‘how important it is that ordinary people and state leaders should preserve the memory of it regardless of the political expediency’.

His Holiness recalled the historical context in which Russia began struggling for the liberation of the Bulgarians. ‘The Crimean War actually was a war of united Europe against Russia, who came to the defense of the Orthodox in the Middle East and its holy places. And Russia suffered defeat in that war. Can you imagine a situation in which it was decided to take part in the liberation of Bulgaria? The whole Europe was against her. She had to overcome that ‘diplomatic embargo’ in order to make a decision on the participation of Russian troops in the liberation of Bulgaria. Russia did not look at Europe: moved by her love of the Bulgarian people, still weakened by the previous war and having no political support in the world, she began her struggle for the liberation of the Bulgarians. It was a great example of how spiritual, cultural and religious solidarity overcomes political pragmatism’.

In connection with the fact that the day before, during the solemn ceremony at the monument to the Tsar Liberator, Emperor Alexander Nikolaevich in the National Assembly Square, the Bulgarian people’s gratitude was expressed not to the united Russian Army but to particular countries which were part of the Russian Empire at that time, particularly, to Poland and Lithuania, Patriarch Kirill underscored that ‘Bulgaria was liberated by Russia, not Poland, nor Lithuania, nor any other countries but Russia. I would like to say frankly that for me it was difficult to hear references to the participation of other countries in the liberation of Bulgaria. Neither the Polish Sejm, nor the Lithuanian Sejm made the decision to start a war against Ottoman Turkey. We stand for historical truth; we won it by our blood and there can be no political and pragmatic reasons for which this truth should be hushed up or interpreted falsely’. 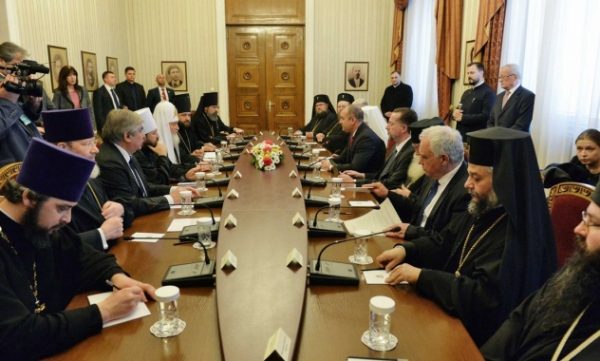 His Holiness thanked the president and all the state leaders of Bulgaria and the Bulgarian Orthodox Church for the celebrations as they ‘once again helped us all to become aware of the great role that the Orthodox Church played in the liberation of Bulgaria’.

He also expressed hope that respect and gratitude for the great sacrifices made by the Russian people to liberate Bulgaria despite any political sets of circumstances will be preserved in the consciousness of the Bulgarian people and the political elite of the country.

‘If, speaking about friendship, we forget about sacrifices made in liberating Bulgaria, then these words become meaningless. I do know that Bulgaria is interested in developing bilateral relations with Russia. And these relations should use the great spiritual, historical, cultural and religious potential that exists in the relations between our two countries. Let us do all that we can to make this potential work for a better future of Russia and Bulgaria. We love Bulgaria and the Bulgarian people regardless of the current political situation’.

The head of the state, on his part, said that in Bulgaria nobody underestimates the contribution made by the Russian Army to the liberation of the country, but ‘the Russian Army was multinational, and we honour the memory of each nation’. At the same time he stressed that ‘we respect our history. It is written in it that it was a Russian-Turkish liberation war, not Polish-Turkish or any other’.

His Holiness thanked the president for this statement and mentioned the speech he made at the memorial to Russian soldiers and Bulgarian volunteer corps in Shipka, ‘I very much appreciate your personal contribution, your stand in life, which has become clear to me in our first talk with you and in your speech. I believe you are an outstanding leader of the Bulgarian people and an excellent orator’, the patriarch stressed.

Speaking about the ceremony which had taken place on Shipka, Patriarch Kirill said, ‘For me it was a profound spiritual experience. I realized that regardless of the policy pursued by the state leaders in Bulgaria, the Bulgarian people are profoundly grateful to the Russian people’. His Holiness expressed hope that the authorities would take these moods into account in full measure in building their relations with the external world. ‘Whatever the political current situation may be in Europe, I would ask you and you colleagues to never forget our history and love that exists on the deep-laid level of the people between the Russians and the Bulgarians and the special relations existing between the Russian and Bulgarian Orthodox Churches’, he said.