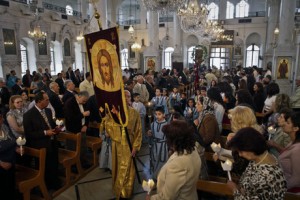 The aging Christians holed up inside a retirement home in the devastated northern Syrian city of Aleppo have no light, no telephone lines, and little idea of what is happening in the outside world.

But fellow Christians and rebel fighters still ensure they do not go hungry, bringing the dozen or so residents whatever food they can every day.

The St. Elie Rest Home, founded in 1863, is behind a black metal door on a street strewn with debris and rubbish a short way from the front line where rebels and regime forces face off against each other.

“We welcome everyone who has been abandoned or is in need,” says Sister Marie, 75, the beaming Mother Superior.

“This is a place where life can be enjoyed,” she adds, gesturing to the 20 rooms adjoining a cloister and courtyard with a fountain and greenery.

“If we’re hungry, there’s always something we can eat,” says resident Evan Wehbe, 66, who arrived at the home nine years ago because she could no longer pay her rent.

The costs of running the home are borne by Syria’s Christian community and by rich sponsors.

“We are a small community, but we join forces and look out for one another. That makes us strong,” says 53-year-old Michael Oberi, who sought refuge in the home with his wife Sarbi Magarian when the conflict began.

“Our home was hit by a shell. We had nowhere else to go and we were welcomed here,” he adds.

Sister Marie says a doctor sometimes calls to check on the residents, and “there is a small dispensary nearby.”

“They treat us very well, and if we need medicines or check-ups, all the medical fees are paid by the Christian community.”

Residents of the home also get 500 Syrian pounds ($7) a month pocket money “to buy some tobacco or some small treat,” says Mrs Wehbe, who admits to having a sweet tooth.

Only two common areas are heated — by wood-burning stoves — so it is there that the residents congregate to chat over a coffee.

But the din of warfare is ever present.

“We usually hear shooting and explosions going off every hour. The day we no longer hear fighting, that’s when we worry,” says Sister Marie.

Oberi says he only goes out in search of food.

“The bombing and fighting make us very afraid. Sometimes we hear it very close by,” he says. “A few days ago, I was in the street and a sniper’s bullet whizzed past my foot,” adds the former soldier who says he has fought against Israel.

“This war is much more frightening. I can no longer sleep.”

The St Elie Rest Home has not been spared in the fighting. Two shells hit the neighboring building, shattering the home’s windows and twisting the entrance door.

“Every day rubble falls in the courtyard when bombs go off nearby. We have no light and haven’t had a phone line for six months,” says Sister Marie.

“We have no news of what is happening in Syria. We’re completely isolated from the world.”

Despite the dangers, the energetic former teacher of English continues to look after those in her charge.

“When I go out into the street, I call out to the snipers not to shoot,” she says.

Before the war, the families of those in the home used to visit their relatives, “but with the fighting, they’re afraid to come and see us now.

“And of course we cannot change where we are, and there is nowhere else for us to go. All of Aleppo is at war.”

The residents are lavish in their praise of Commander Hatab, the local head of the rebel Free Syrian Army, who often comes to see them.

“Every day rebel fighters bring us fresh bread. They’re very good to us,” says Magarian. “They are Muslim and we are Christian, but our religions must be a source of union, not division. We are all brothers.”

Sister Marie is firm in her convictions.

“Every day we pray for peace,” and when the bombs fall, “we take refuge in the chapel, the safest place in the building.”