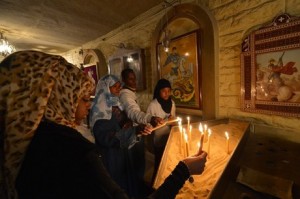 Egypt’s minority Coptic Christians celebrate on Monday their first Christmas under Islamist rule and amid a climate of fear and uncertainty for their future.

“I do not really feel safe,” says Ayman Ramzi, who feels his community threatened by the rise of Islamists in the world’s biggest Sunni Arab nation.

He was summarizing the growing feeling of insecurity in Egypt where Copts, the largest and one of the oldest Christian community in the Middle East, will attend midnight mass later Sunday ahead of Christmas.

President Mohamed Morsi, who hails from the powerful Muslim Brotherhood, has pledged to be the “president of all Egyptians.”

Late last month he renewed the pledge saying that a controversial new constitution drawn up by an Islamist-dominated council guaranteed equal rights and freedom for all Egyptians “with no exceptions.”

But Ramzi, 38, says a growing number of “hostile” statements from several radical Islamist groups against Christians is cause for concern.

He pointed to a fatwa, religious edict, posted several days ago on the Internet warning Muslims that it was forbidden to wish Copts a Merry Christmas.

The fatwa was posted by the Committee for the Legitimate Rights and Reform, a group close to radical Salafist factions, which includes among its members the Brotherhood’s number two Khairat al-Shater.

And recently the independent newspaper al-Watan quoted Salafist figure Hisham al-Ashri as saying he wanted to meet Copts outside their churches to convert them to Islam.

Ashri, who was identified as the founder of the ultra-conservative Commission for the Promotion of Virtue and Prevention of Vice, also demanded that Coptic women wear the Islamic veil.

Copts, who represent 6-10 percent of Egypt’s 83-million-strong population, are spread across the country with most concentrated in central Egypt.

They belong to all classes of society — from garbage collectors to the great patrician families — but few rise to hold government jobs and most fear they will be further marginalized in the new Egypt.

The transition since the ouster of former president Hosni Mubarak after massive protests in February 2011 has been marked by several confrontations between Copts and Muslims or security forces, some of them deadly.

And many still remember with shock the attack against a Coptic church in Alexandria on January 1, 2011, that killed 23 people.

Today many Copts are thinking of immigrating, like relatives and neighbors who have already left the country.

“My sister is scared for the future and wants to go to the United States with her children,” said airline employee Raymond Faez.

“But I do not want to leave my country,” he said but nevertheless admitted that there is a feeling of “general malaise” among Christians in Egypt.

In the densely-populated Cairo district if Shubra, several Christian traders show warning letters from radical Islamists they received ahead of Christmas.

“We have been getting such letters for years,” said shopkeeper Morkos Rushdi, who seems resigned to his fate.

As under Mubarak’s regime, the Islamic sharia law remains the “principal source of legislation” in the new constitution that was adopted in December and critics say it could pave the way for radical interpretations of the law.

But for the Copts there is still discrimination — namely restrictive legislation concerning building new churches in a country where there are no limits for building mosques.