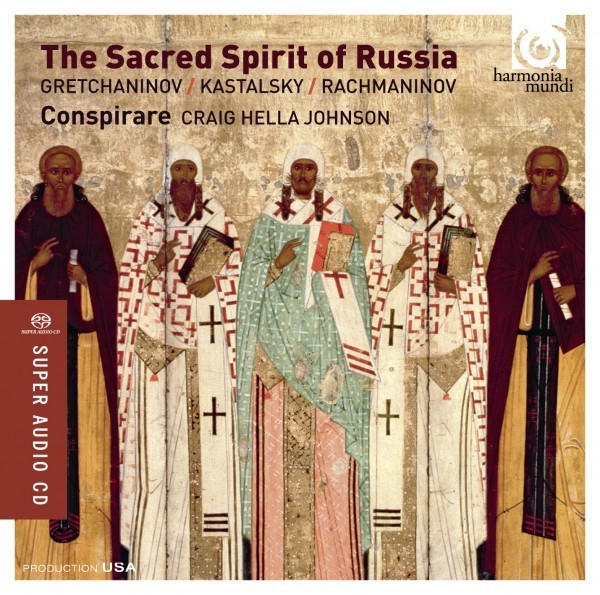 The forty-two-voiced choir, based in the city of Austin, the state capital of Texas, which consists of top-level choral singers from all over the United States, has been paying a lot of attention to the repertoire of the Russian Orthodox Church. Several years ago, the choir performed the monumental All-Night Vigil by Rachmaninoff. The interest elicited by preparing and performing this piece inspired the ensemble’s conductor Craig Johnson to delve more deeply into the Russian choral repertoire.

For advice, he turned to Vladimir Morosan, Doctor of Musical Arts, founder and owner of the sheet music publishing company Musica Russica, in the city of San Diego, who has spent over 30 years collecting and republishing the masterpieces of Russian Orthodox sacred music. Morosan compiled the program for Conspirare, then coached the choir on Church Slavonic diction and performance style, and was also present at the recording sessions. “Our goal,” says Morosan, “is to make this great heritage of Russian spiritual culture known worldwide. Our publications (in which the text is underlaid in both the Cyrillic and Latin alphabets) make these musical works accessible to performers who do not speak Russian.”

Although many Russian composers, including Tchaikovsky, Gretchaninoff, Ippolitov-Ivanov and Rachmaninoff composed full cycles of the Liturgy of St. John Chrysostom, in Russian churches it is common to sing hymn settings by a variety of composers within a single service. This was the approach used to assemble the program for this CD, simulating a form in which the service would have been sung in a large Russian cathedral of the first or second decade of the twentieth century: the First Antiphon by Ippolitov-Ivanov, “Only-Begotten Son” by Gretchaninoff, “The Cherubic Hymn” by Chesnokov, “A Mercy of Peace” by Kastalsky, and so on. Also included were the festal hymns of Christmas by Sviridov, Kastalsky, and Il’yashenko – and a series of spiritual concertos.

It is interesting to note that most of this music remains unknown and rarely performed in Russia as a result of the rupture in tradition that occurred during the 75 years of persecution suffered by the Orthodox Faith and the Church during the Soviet regime. Several works in this program are the North American and possibly world premieres, heard for the first time in the hundred years since they were composed. (All the works in the program are published by Musica Russica, and the musical scores can be accessed online here.)

How do non-Orthodox American singers (many of whom are church choir directors, teachers. and church choristers in parishes of their own faiths) and listeners who are not familiar with Russian Orthodox culture respond to this music? With extraordinary interest, enthusiasm, and gratitude! For many, this is their first contact with the Orthodox Church – with its theology expressed in the sacred texts of hymns and with its special emphasis on divine beauty. They realize that this music possesses a unique spiritual depth, an authenticity of expression, and reflects the highest creative impulses of man. The singers discover that to perform this music requires not only external vocal skills, but also a serious mental focus, and a giving of one’s innermost self, which both touches and rewards the performer. Listeners, in turn, become aware that they are hearing music that is addressed directly to the heart, the innermost core of a human being, that they are in the presence of a truly sublime and sacred art. And involuntarily they ask the question: “And what else is there in the depths of Orthodoxy?”

In his words of thanks upon receiving the award, conductor Craig Johnson expressed his gratitude to the residents of Austin for their support of Conspirare’s artistic activity, to Harmonia Mundi, which recorded and released the disc, to Vladimir Morosan and Musica Russica publishers, without whose participation this project would not have been possible, and expressed the hope that this disc will facilitate the creation of “bridges” between Russia and America, through the knowledge of the true “sacred spirit” of Russia.