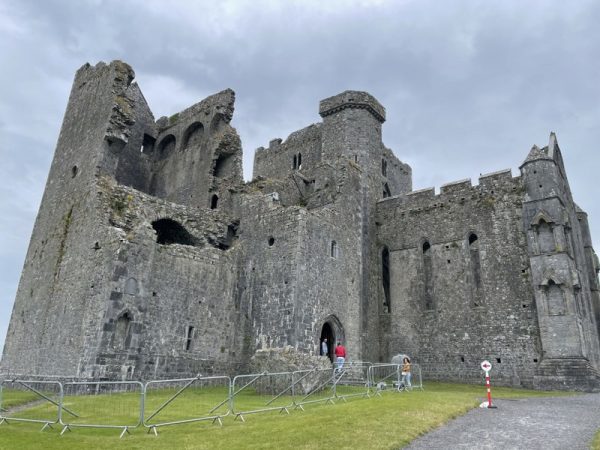 The castle and church atop the ancient Rock of Cashel. Photo: orthodox-europe.org

The first pilgrimage through Ireland organised within the Diocese of Great Britain and Western Europe concluded successfully on Sunday, bringing to a close a full week of prayerful visits to sites associated with the numerous Orthodox Saints who have shone forth on the island of Ireland.

Organised by the Mission Parish of St John the Wonderworker in Belfast, Northern Ireland, the pilgrimage was well-subscribed despite the instability of international travels, with over twenty participants from various parts of the world, including Europe, the UK, the United States of America and the Russian Federation. The pilgrimage was pleased to welcome participants not only from the Diocese of Great Britain and Western Europe, but also the German Diocese and American Dioceses of the Russian Church Abroad, as well as various dioceses of the Moscow Patriarchate in Europe, and the Orthodox Church in America.

After commencing with Confession and the Divine Liturgy in the parish of St Colman in Stradbally last Sunday, on the summer feastday of St Seraphim of Sarov, the pilgrimage group set out by coach for the first of its visits – to Glandalough and various holy sites associated with St Kevin, the great ascetic and monastic founder, including the ‘monastic city’ of Glandalough and the near and far lakes where the saint practiced his asceticism. His Grace Bishop Irenei of London and Western Europe joined the pilgrims, together with clergymen who were themselves pilgrims – Archpriest Michael Carney and Priest Patrick Burns – and spoke to the participants about the saints they were encountering and the sites on which they would set foot, as well as leading the group in various Divine Services and prayers at each.

Following Glandalough, the southern-most holy well of St Patrick, the Apostle to Ireland, was visited and the Blessing of Waters performed there – participated in both by pilgrimage participants as well as local residents who came out to take part. The pilgrims then travelled to Ardmore, where the great St Declan founded his monastery, praying for the repose of their departed loved ones in its remains and before the site of the saint’s original grave – as well as visiting his far hermitage and holy well. At the remote lake hermitage of St Finbarr, the pilgrims again blessed the waters of a holy well and served a moleben upon the ruins of the saint’s cell – a prayerful pattern then repeated in the monastery of St Finian on Inishfallen Island, to which the pilgrims voyaged by way of a short boat journey.

On Wednesday, the pilgrims took the much longer boat journey out to sea, to land on Skellig Michael, the ancient rock upon which an Orthodox monastery was founded in the sixth century, dedicated to the Archangel Michael. There the pilgrims made the long ascent up the mountain by way of the ancient stone steps across the cliff faces, to arrive at the remains of the ancient monastery. In the still-standing remains of the monastery’s original church, the pilgrims chanted psalms and Orthodox prayers – just as was first done there over 1,400 years ago, and for centuries to follow.

The pilgrims then continued to the Skattery Island retreat of St Senan, and later to St Brigid’s well, and on Thursday to the monastic sites associated with St Columba, where the Divine Liturgy was served and the pilgrims fed with the heavenly food of the Lord’s Body and Blood. The pilgrimage then continued northward, where a multitude of sites associated with St Patrick (including the original site of his burial, his holy well in the north, and several of his monastic settlements and those of his disciples), St Olcan (who likewise has a holy well and buildings at the site of his asceticism), and others. On Sunday, the Divine Liturgy was served in the mission chapel of St John the Wonderworker in Belfast, prior to a final excursion to nearby holy sites, before the pilgrimage concluded and the pilgrims returned to Dublin for their departure.

Each day of the pilgrimage was wholly shaped by the pilgrims’ common prayer: morning prayers were chanted each day on the coach, and likewise evening prayers, while various molebens, pannikhidas and other Divine Services were prayed at the holy sites visited throughout the days. The pilgrims also together prayed their pre-Communion prayers, as well as sang services to St Mary Magdalene (whose feastday fell midway through the pilgrimage); and all were able to make their confessions prior to the three celebrations of the Divine Liturgy that marked out the week.

In addition to the sites associated with specific saints, many other cultural sites in Ireland were visited – many, if not most, of which also have some connection to the island’s rich Orthodox history. Among these were the Rock of Cashel and seat of the Kings of Munster (visited by St Declan, and where St Patrick converted one of the Munster kings), the Lakes of Killarney, Ross Castle, the Ring of Kerry and the Kerry Cliffs, the Lahinch Coast and the Cliffs of Moher, monastic ruins on the banks of the Shannon River, the Monastery of the Life-Giving Spring, the ring-fort of Grianan of Aileach, Portrush on the North Coast, the Giants Causeway, and many others.

The pilgrimage had a profound affect upon its participants, one of whom described the week as ‘an extraordinary experience of holiness’, and served as yet another reminder of the immense spiritual heritage we possess in our countless local saints. It is intended that this should be the first of a recurring tradition of pilgrimages through Ireland organised by our Diocese, to stand alongside pilgrimages through Great Britain, already prepared, and pilgrimages through the Orthodox sites of continental western Europe, which are being prepared at present.

Most viewed articles
First Church in the Antiochian Archdiocese Named for St. Xenia of St. Petersburg Prepares for Feast Day291
Patriarch Kirill: Not Only People, But Churches Too, Can Depart from God180
A Christianity of the Catacombs111
My World’s Different105
Patriarch Porfirije of the Serbia: Our Position on the Church Issue in Ukraine Has Not Changed90
Thoughts on Theophany and Revelation83
Archbishop Makarios of Australia: ” the Great privilege of the Orthodox Church is that we live in communion”39
1
Most popular authors
Pravmir.com team600
Archpriest Lawrence Farley111
Protopresbyter Themistoklis Mourtzanos105
Elissa Bjeletich83