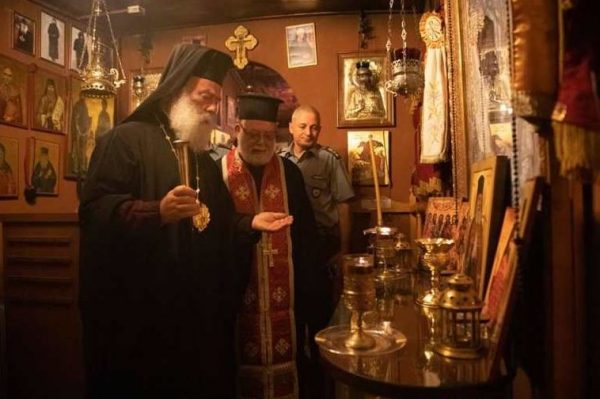 His Beatitude Theodoros II, Pope and Patriarch of Alexandria and All Africa. Photo: patriarchateofalexandria.com

His Beatitude Theodoros II, Pope and Patriarch of Alexandria and All Africa was a humble pilgrim at the Champion Leader of our Nation, the All-Holy Virgin Pantanassa (Queen of All), at the Battalion Headquarters of the National Guard on Tuesday 15th September.

After receiving a warm welcome from the leader of the National Guard, Lieutenant General Democritus Zervakis, His Beatitude sang with great solemnity the Kontakion of the Akathistos Hymn “Ti Ypermaho” (O Champion Leader).

Then, he prayed with tears in his eyes to The All-Holy Virgin Pantanassa, who adorns the sacred Chapel of the national Guard, for the benefit of the universe, all people who suffer from sadness, persecutions, sorrows, hunger, hardships, wars, diseases, illness, who place their hope in the Protectress and Regent of the Cypriot army.

Brigadier General Panagiotis Pantelides who is a supporter of Monastics, pioneer and permanent warden of the chapel of the All Holy Virgin Pantanassa, undertook the duties of a guide in the very beautifully landscaped area of the chapel. Besides, he was the reason for the transfer of a copy of the Icon of the All Holy Virgin Queen of All from Mount Athos to the Headquarters of the National Guard.

The Alexandrian Patriarch did not hide his admiration for this spiritual oasis that has been created in the grounds of the Battalion Headquarters and did not fail to pay tribute to the officers who undertook this initiative, in times when the Church is being tested in various ways. “It is important to have power,” said His Beatitude, “because when one is strong, others respects him.”

His Beatitude was accompanied by Metropolitan George of Guinea and Nicodemus Bishop of Nitria, who also received the same pilgrimage blessing.

At the end of the tour, those in attendance who possessed the art of chanting, sang the acclamation of His Beatitude the Patriarch of Alexandria and His Beatitude heartily blessed everyone.

As an expression of his paternal love, His Beatitude donated an icon of St. John the Merciful, Patriarch of Alexandria, to be kept with the rest of the valuables in the sacred chapel, and he himself received recipient of a suitably modest icon of the All-Holy Virgin Queen of All, which incidentally, was given as a gift from Mount Athos especially for the visit of the Patriarch to the Chapel.

The Patriarch announced with great satisfaction that the icon will be placed as part of the sanctuary under construction in Benghazi, Libya.

The chapel of the All-Holy Virgin Queen of All operates under the supervision of the Religious Directorate of the Battalion Headquarters of the National Guard and belongs to the Archdiocesan Region.

After the traditional refreshments at the guest hall of the chapel, His Beatitude attended an official dinner with the Minister of Defense of Cyprus, the Chief of the National Guard and other officers at the Officers’ Club.