And Why Do We Make Prostrations? 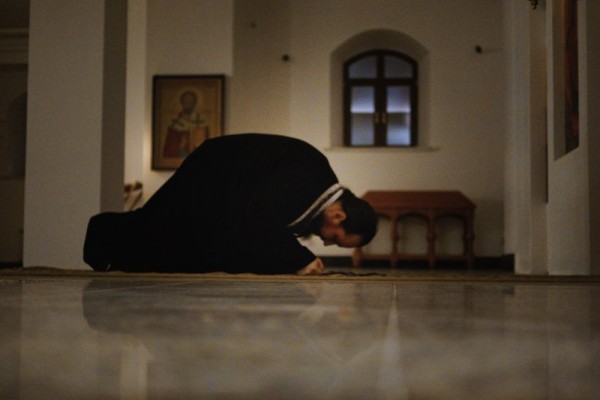 Prostrations may seem a curious and dubious exercise for Christians to assume. They have a vital place, though, in the spiritual journey that leads through Lenten asceticism to Paschal joy.

A professor at Sarah Lawrence College long made it a practice to bring some of her students to St Vladimir’s Seminary, to introduce them to Orthodox worship. It was always a welcome sight to see her and the group of young men and women arrive as the community was gathering together in the seminary chapel. Interestingly, she chose to offer them this introduction on a Wednesday afternoon in Great Lent, during the Liturgy of the Presanctified Gifts. As could be expected, reactions on the part of the students were mixed. With the many prostrations made by members of the congregation during the service, those reactions included a measure of surprise, or amusement, or even scandal.

Physical gestures are looked on with a great deal of ambivalence by many Americans. In Western Europe no one is surprised or offended when teen-agers, for example, greet each other in the street by kissing each other on the cheek: two, three or four times (protocol limits it, nevertheless, to boy-girl or girl-girl). If I enter a restaurant and meet an Orthodox friend, instinctively we tend to greet each other by embracing in the same way. The look on the faces of other patrons, however, is usually one of shock or bewilderment: “We don’t do that in our society.” We Orthodox do, though.

We also make prostrations, both in our times of personal prayer and in our liturgical services, particularly during Great Lent. Why do we do that? Is it some odd carry-over from traditional monastic spirituality, with its emphasis on rigorous ascetic discipline? Or is it a practice that has special value for anyone who wishes to enter seriously, deeply, into the Life in Christ? Is it, in other words, a peculiar exercise, taken on perhaps for some health benefit, as a kind of Christian yoga? Or is it a practice that works an actual and positive transformation in our life, one that is both physical and spiritual?

Americans these days are thoroughly familiar with the prostrations made by Muslims during their ritual of daily prayer; we see images of it almost daily in the media. Most are not aware that Orthodox Christians practice the same discipline, kneeling in a place of worship and touching the head to the ground, before rising to stand in the usual attitude of prayer. They would be amazed to witness those monastics, for example, who make literally hundreds of prostrations during an ordinary Vespers service (a common sight at Holy Dormition monastery in Michigan, as in many such communities). They would be equally surprised to see “ordinary” lay people prostrating themselves repeatedly throughout the Compline service of the first week of Great Lent, with the penitential Canon of St Andrew of Crete. But again, this is what we Orthodox do. Why?

A fine answer to the question appears in the writings of the great hesychast bishop Theoliptos of Phildelphia (+1322). “Do not neglect prostration,” he admonishes his spiritual children.

“It provides an image of man’s fall into sin and expresses the confession of our sinfulness. Getting up, on the other hand, signifies repentance and the promise to lead a life of virtue. Let each prostration be accompanied by a noeticinvocation of Christ, so that by falling before the Lord in soul and body you may gain the grace of the God of souls and bodies.” [1]

The importance of prostrations, from Theoliptos’ point of view, is far more spiritual than physical. In bending our knees we assume an attitude of humility before the God to whom we offer our prayer. Kneeling, then touching our forehead to the ground, we acknowledge our sinfulness; we create a living image of our fall into sin. Our very posture represents a confession of that state, a calling to mind of our spiritual poverty, of our susceptibility to passions of greed, lust, anger and malice. As we make our descent in body and in spirit, we confess as well the Name above every name, the Name that “upholds the universe,” as the Shepherd of Hermas expresses it, and upholds our personal world as well: “Lord Jesus Christ, Son of God, have mercy on me, a sinner!”

Then, as we rise to our feet, this confession both of Christ and of our sinfulness becomes a bodily symbol, a virtual promise, that change will occur in our life. We commit ourselves to repentance, to a turning from the old Adam to the new. The inner transformation signified by this gesture of course does not come about as a result of our prostrations, and not even as a result of our decision to repent. Like every aspect of our Christian life, this transformation—the power to act upon our commitment—is a gift of grace that comes down “from above, from the Father of lights.”

This passage from the Epistle of James (1:17), however, needs to be read in its context, expressed so well throughout the letter:

“What does it profit, my brethren, if a man says he has faith but has not works? Can his faith [alone] save him?… Show me your faith apart from your works, and I by my works will show you my faith… For as the body apart from the spirit is dead, so faith apart from works is dead.”

When we consider ascetic disciplines such as fasting and prostrations, it is essential that we remember words like these. Those disciplines can indeed work an inner transformation, by purifying and directing our mind and spirit toward “the one thing needful” (Lk 10:42). But they are never ends in themselves. As the Holy Fathers teach repeatedly, they exist for the sole purpose of leading us to Christ, who alone heals our brokenness, forgives our sin, and draws us into eternal communion with God and with one another.

The last word, when we make a determination to assume a serious Lenten discipline, is given to us by our Lord Himself. Inveighing against the hypocrisy of religious leaders who followed the letter of the Law yet ignored its spirit, he declared:

“Woe to you, scribes and Pharisees, hypocrites! for you tithe mint and dill and cumin, and have neglected the weightier matters of the law, justice and mercy and faith; these you ought to have done, without neglecting the others” (Mt 23:23).

Ascetic practices, particularly during the Lenten periods, are good and even necessary, if we are to enter fully into the spirit of the feast, and allow the Spirit Himself to work His transforming grace and power in our life. But those practices can never stand alone. One of their most basic purposes, aside from the spiritual value they offer us, is to lead us into acts of justice and mercy toward those around us. These above all we ought to do, without neglecting the others.