An Angel of the Church: In Remembrance of Metropolitan Vladimir of Kiev and All Ukraine: Part III

I could express my experiences of that day with the words of Prince Vladimir’s emissaries who, having been to the Constantinopolitan Church of Sophia, the Holy Wisdom of God, said that they did not know whether they were in heaven or on earth.
Archbishop Philipp of Poltava and Myrhorod | 09 July 2014
On July 5, 2014, His Beatitude, Metropolitan Vladimir of Kiev and All Ukraine, head of the Ukrainian Orthodox Church (Moscow Patriarchate) reposed in the Lord. In his memory we will offer five brief tributes – one each day – by fellow hierarchs of the Ukrainian Church. 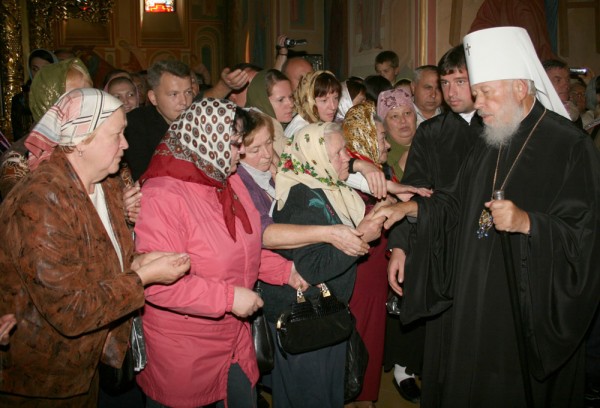 I remember the day of my episcopal consecration as one of the brightest and simultaneously moving experiences of my life. And this is not surprising, given that the divine flame of Pentecost illuminates and renews everyone consecrated to the episcopal rank.

This day passed by for me like a single instant. I was filled with a sense of indescribable joy and, at the same time, with a great feeling of the responsibility that was now being placed on my shoulders. I understood that from this day forward I had new tasks and that a field of higher and more difficult ministry to the church was being opened up to me.

Naturally, this Divine Liturgy, which was headed by the Primate of the Ukrainian Orthodox Church with an assembly of hierarchs, was especially solemn and majestic. The service in the ancient church of the Kiev-Caves Lavra and the marvelous chanting of the Lavra choir – all this could not leave one with a calm heart. I could express my experiences of that day with the words of Prince Vladimir’s emissaries who, having been to the Constantinopolitan Church of Sophia, the Holy Wisdom of God, said that they did not know whether they were in heaven or on earth.

I think that many who have had the opportunity to communicate with His Beatitude, Metropolitan Vladimir, would agree that he is indeed, as the Apostle John the Theologian put it, an Angel of the Church. His pastoral words are always spoken with love and care; and his prayerful spirit and love for the divine services are always inspiring. I am grateful to His Beatitude, Metropolitan Vladimir, for the words he spoke to me when presenting me with the episcopal staff.

He spoke of the difficulties and obstacles that would face me in my episcopal ministry, and these words have been my guiding light. To this day I sense His Beatitude’s prayerful support that issued from him while speaking his words at my nomination as bishop. The Primate of our Church’s wisdom and height of spirit help one to navigate difficult circumstances when dealing with pressing issues for the Church, and I sincerely thank the Lord that my episcopal ministry is taking place under his guidance.