Angels: Their Role in our Lives and Worship 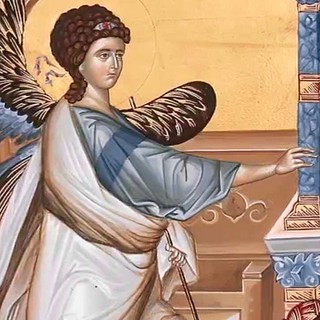 Part 1: Introduction to angels, and the Archangel Gabriel

Angels are fascinating beings created by God to be of service to God and to be messengers of God to men and women. We read in Psalm 91, that “…the Lord will give His angels charge over you to protect you in all your ways.”

We can feel that they are all around us, but how much do we know about angels? We learn from the scriptures that angels truly do exist. There are over 250 references to them in the Old and New Testament, and they appear regularly from the book of Genesis to the book of Revelation. When we look around in our churches we see angels in numerous icons; these aren’t added for sentimental decoration, rather they are placed there to remind us that the angels of the Lord are with us. We see the images of angels with the evangelists Matthew, Mark, Luke, and John, and also see them in the iconography in the dome surrounding the face of Christ.  Again, we view the Angel Gabriel in icons telling the Annunciation story, and we find the most prominent angels, Archangel Michael and Archangel Gabriel, regularly depicted. Gabriel and Michael guard the holy of holies in our church temples.

Yet we might ask, do we encounter angels in our daily life? St. Paul, in his letter to the Hebrews 13:2, says: “Do not forget to entertain strangers, for by doing so, you have unwittingly entertained angels.” Angels are heavenly beings, yes, yet often they will take a human body, to fulfill an assignment from God. I believe in all of our lives we encounter the angels coming to us with human faces, particularly in times of loss, grief, and immense need. Our nation and the world has assuredly witnessed living angels throughout the pandemic. Whether they have appeared as doctors, nurses, or first responders, angels come and extend a helping hand to us.

When I first came to the United States in 1971, I was in New York and didn’t have enough money to buy a ticket to get to my destination, the city of Albany. The woman at the counter was yelling at me to move and get out of the way, but I did not understand her. I didn’t have enough money and was alone, my family having been left far behind in Syria, and I did not speak English. A man behind me touched my shoulder and offered to pay for my ticket. I never saw him again and have always believed he was a living angel, and that it was my mother’s prayers that sent this man to help me.

The scriptures teach that there is a hierarchy of angels—nine levels including the Seraphim (as the choir sings), the Cherubim, and the Thrones. The second hierarchy contains the Dominions, Virtues, and Powers, and the third contains Principalities, Archangels and Angels.

Angels are God’s messengers. When Abraham was living, he saw three men—angelic visitors, in reality—who were coming to his tent, and so he invited them in. As they were strangers he fed them, receiving them with great hospitality. They warned him about the coming destruction of Sodom and Gomorrah. They also prophesied that Abraham’s wife Sarah would bear a son in a year, and that he was to be called Isaac.

One angel in particular has great significance. On July 12, we honor the great Archangel Gabriel. Gabriel’s name means “Man of God,” which translates to “God is mighty” or “the strength or power of God.”

The most prominent role that the Archangel Gabriel played is recorded in the book of Luke.  In Luke 1, verse 11-13, we read:

Then an angel of the Lord appeared to him, standing at the right side of the altar of incense. When Zechariah saw him, he was startled and was gripped with fear. But the angel said to him: “Do not be afraid, Zechariah; your prayer has been heard by God. Your wife Elizabeth  will bear you a son, and you are to call him John.

Zechariah asked the angel, “How can I be sure of this? I am an old man and my wife is well along in years.”

The angel said to him, “I am Gabriel. I stand in the presence of God, and I have been sent to speak to you and to tell you this good news. And now you will be silent and not able to speak until the  day this happens, because you did not believe my words, which will come true at their appointed time.”

In the sixth month of Elizabeth’s pregnancy, God sent the angel Gabriel to Nazareth, a town in Galilee, to a virgin pledged to be married to a man named Joseph, a descendant of David. The virgin’s name was Mary. The angel went to her and said, “Hail Mary, you are full of grace, the LORD is with you.” Mary was greatly troubled at his words and wondered what kind of greeting this might be. But the angel said to her, “Do not be afraid, Mary; you have found favor with God and you shall bear a son and name Him Jesus.

If the Angel Gabriel visits us, we can be sure that God has something significant to say to us! Are we listening?

Gabriel was also sent to St. Joseph the Betrothed in a dream, telling him that Mary’s pregnancy was indeed miraculous and of the Holy Spirit, and that Joseph should protect and care for her. (Matthew 1: 20, 21)

Still today we pray and intercede with the Archangel Gabriel to take our prayers for forgiveness to God; we ask him to bless our parents and to help protect us during this crisis of coronavirus and world trouble; and we beseech him to guard us during this most uncertain time.

This is the first in a series of four reflections on the role of angels. Father George Shalhoub is pastor and founder of the Antiochian Orthodox Basilica of St. Mary in Livonia, MI. He can be reached at gshalhoub@tbosm.com.

Angels: Their Role in our Lives and Worship, Part 2

Part 2: Don't be afraid! Remember what the Gospel says? Do not forget to entertain strangers; for doing so, you…

Happy Father's Day! As our nation sets aside special days to honor our fathers and mothers, we must…

Who Else Will Raise the Next Generation of Orthodox Christians? A Reflection for Mother’s Day

This Sunday, people throughout the United States and many places around the world will gather to honor their…