Archangel Michael and All the Bodiless Powers Celebrated Today 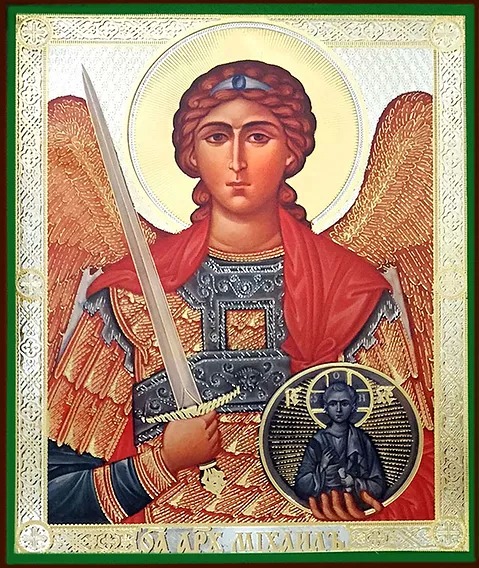 On November 21 (8) we celebrate the feast of the Archangel Michael and the Other Heavenly Bodiless Powers. Here is a portion of the synaxarion reading for them from the OCA website.

The Synaxis of the Chief of the Heavenly Hosts, Archangel Michael and the Other Heavenly Bodiless Powers: Archangels Gabriel, Raphael, Uriel, Selaphiel, Jehudiel, Barachiel, and Jeremiel was established at the beginning of the fourth century at the Council of Laodicea, which met several years before the First Ecumenical Council. The 35th Canon of the Council of Laodicea condemned and denounced as heretical the worship of angels as gods and rulers of the world, but affirmed their proper veneration.

A Feast day was established in November, the ninth month after March (with which the year began in ancient times) since there are Nine Ranks of Angels. The eighth day of the month was chosen for the Synaxis of all the Bodiless Powers of Heaven since the Day of the Dread Last Judgment is called the Eighth Day by the holy Fathers. After the end of this age (characterized by its seven days of Creation) will come the Eighth Day, and then “the Son of Man shall come in His Glory and all the holy Angels with Him” (Mt. 25:31).

The Angelic Ranks are divided into three Hierarchies: highest, middle, and lowest.

All the Ranks of the Heavenly Powers are called angels, although each has its own name and position by virtue of their service. The Lord reveals His will to the highest ranks of the angels, and they in turn inform the others.

Over all the Nine Ranks, the Lord appointed the Holy Archangel Michael (his name in Hebrew means “who is like unto God”), the faithful servitor of God, as Chief Commander. He cast down from Heaven the arrogantly proud Lucifer and the other fallen spirits when they rebelled against God. Michael summoned the ranks of angels and cried out, “Let us attend! Let us stand aright before our Creator and do not consider doing what is displeasing unto God!”

We invoke Saint Michael for protection from invasion by enemies and from civil war, and for the defeat of adversaries on the field of battle. He conquers all spiritual enemies.

Holy Scripture and Tradition give us the names of the Archangels:

Gabriel: strength (power) of God, herald and servitor of Divine omnipotence (Dan 8:16, Luke 1:26). He announces the mysteries of God.

Uriel: the fire or light of God, enlightener (3 Ezdras 5:20). We pray for him to enlighten those with darkened minds.

Selaphiel: the prayer of God, impelling to prayer (3 Ezdras 5:16). He prays to God for mankind.

Jehudiel: the glorifying of God, encouraging exertion for the glory of the Lord and interceding for the reward of efforts.

Barachiel: distributor of the blessings of God for good deeds, entreats the mercy of God for people.

On icons the Archangels are depicted in according to the character of their service:

Michael tramples the devil underfoot, and in his left hand holds a green date-tree branch, and in his right hand a spear with a white banner on which is outlined a scarlet cross, or sometimes a fiery sword.

Gabriel with a branch from Paradise, presented by him to the Most Holy Virgin, or with a shining lantern in his right hand and with a mirror made of jasper in his left.

Raphael holds a vessel with healing medications in his left hand, and with his right hand leads Tobias, carrying a fish for healing (Tobit 5-8).

Uriel in his raised right hand holds a naked sword at the level of his chest, and in his lowered left hand “a fiery flame.”

Selaphiel in a prayerful posture, gazing downwards, hands folded on the chest.

Jehudiel holds a golden crown in his right hand, in his left, a whip of three red (or black) thongs.

Barachiel is shown with a white rose on his breast.