On Bright and Dark Powers 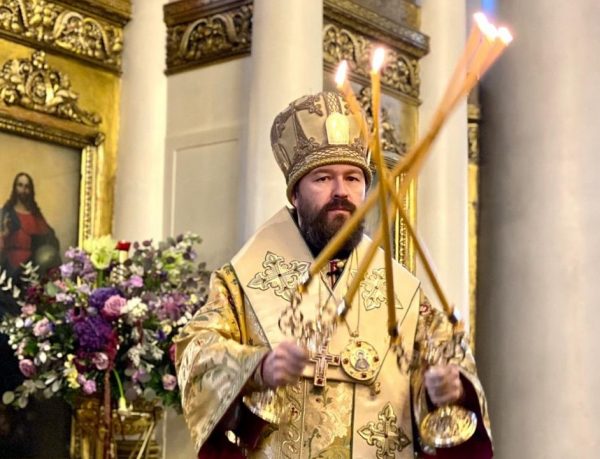 The Gospel reading concerning the Lord’s casting out from a man of a legion of demons (Lk. 8:26-39) reminds us of the spiritual world which exists around us. In this world there are good powers and evil powers. The good powers are the angels who accompany us in our lives and who help and protect us. We know that all of us have a Guardian Angel who is appointed by God to protect us from every evil. We must pray to our Guardian Angel and beseech him that he would never depart from us. There are also Guardian Angels who are appointed to protect cities and countries.

We know that the angelic world exists parallel to the physical world and that angels play a realistic and genuine role in our lives. We know and believe that when we serve the Divine Liturgy, the angels truly serve with us. They sing to God the triumphal hymn, they surround the altar table on which abide the Holy Mysteries and they participate with us in the Small and Great Entrances. With fear and trembling they cover their faces in the presence of the performance of the Divine Eucharist, when bread and wine become the Body and Blood of Christ.

We don’t know the manner in which the angels partake of the Divine glory. For us, communing with God and uniting ourselves with Him is only possible through the Mystery of the Eucharist, when the Body and Blood of Christ, God incarnate, mingles within and with us and becomes part of our own body and blood. Therefore, with urgency we rush to participate in Holy Communion, the Holy Mysteries of Christ, knowing that this is a great power, which always helps us to abide with God and to not turn away from Him, experiencing within ourselves spiritual powers which are necessary for us in order to be true and good Christians.

But we also know that along with good powers there also exist evil powers. Evil powers, in the person of the Devil and the demons, also surround us. They strive to bring evil and harm to us, to destroy our interior world and to turn us away from good, in order that through sin we would be torn away from God and become sons or daughters of the Devil.

This danger always lies in wait for us. In order not to succumb to them and in order to protect ourselves and remain unharmed from the machinations of the Devil, we must resolutely practice a few simple things. Above all, we must regularly receive the Holy Mysteries of Christ, because the most powerful weapon against all evil is Holy Communion. When the Lord dwells within us, no one can disturb our internal world and no kind of legion of demons can enter into us. Demons can enter into someone only if that person does not receive Holy Communion, if he lives in sin and if he consciously lives in opposition to God.

We don’t have to fear that someone might put the “evil eye” on us or put some kind of enchantment or curse on us. No one can “ruin” or put some kind of a curse on an Orthodox Christian who receives Holy Communion and protects himself with the sign of the Cross, who wears on his body the Holy Cross and who prays to his Guardian Angel, patron saint, to the All Holy Mother of God and to the Lord Himself. Such a person is safe and protected from every act of the demonic powers.

We see that there are people around us who succumb to and are influenced by the evil powers. This occurs when they willingly allow interior entrance into themselves of the dark and demonic powers. For example, if someone drinks alcohol excessively, sooner or later he will reach such a state that he will in reality see the demons and his life literally will turn into a living Hell. No kind of earthy joys will be able to replace his dependence and need for alcohol, which will never be fully satisfied. It’s the same thing and even more horrible for the person who is a
drug addict. In life he already finds himself in Hell.

You and I live on the earth. Perhaps there is someone among us who already abides in the Kingdom of Heaven when he enters the Divine Temple and communes of the Holy Mysteries of Christ. But on the other hand there are those miserable ones who suffer from the destructive addiction to alcohol or drugs and who already here on the earth find themselves in Hell and are already subject to its torments and tortures. All of this happens when someone willingly and consciously, in spite of and against the teachings of the Church, in spite of the advice of those who are close to him, takes that dangerous path which leads him into the fires of Gehenna.

By the same token, it is illogical and insane when people choose to go to fortune tellers and clairvoyants, as well as to seek healing from physical illnesses, not from physicians, but from sorcerers and wizards. These people also open and expose themselves to the dark powers and allow the evil powers to enter into their bodies and spirits. As a result, such people make themselves vulnerable and unprotected against the activities of diabolical powers, because they do not have within themselves that firm and strong foundation on which the Christian life
must be built, namely the participation in the Holy Mysteries of the Church, and, above all, in the Mystery of Mysteries, which was established and performed by Christ Himself, — the Eucharist.

Let us as often as possible run to this sacred Mystery, seal ourselves with the sign of the Cross and pray to our Guardian Angel, that he would defend us from every evil. Let us pray to the Holy Archangel of God Michael and all the other heavenly bodiless hosts, that they would always be present in our lives. May their heavenly intercessions and grace-filled powers drive away from us every demonic delusion and every demonic enmity and hostility. As a result, nothing will be terrifying for us and the power of God will reliably and mightily protect us from every evil.

Most viewed articles
Seven Lessons for the New Year from St. Seraphim of Sarov237
A Great Time to Join the Orthodox Church171
New Jersey Governor Signs Bill Legalizing Abortion Up To Moment of Birth105
The Way of Christ Is The Way of Love71
Metropolitan Hilarion Celebrates the 20th Anniversary of His Episcopal Consecration57
Brooklyn Street Co-Named for Antiochian Pastor Who Served a Half Century There43
Metropolitan Hilarion: the Church and traditional confessions have done everything possible to improve the situation in Kazakhstan39
4-400×6001
Sunday of the Samaritan Woman1
How We Worship: the Struggle of the American Experience1
Most popular authors
Priest Luke A. Veronis237
Frederica Matthewes-Green171
Ryan Foley105
Pravmir.com team96
Fr. Theodore Stylianopoulos71
Peter Samore43