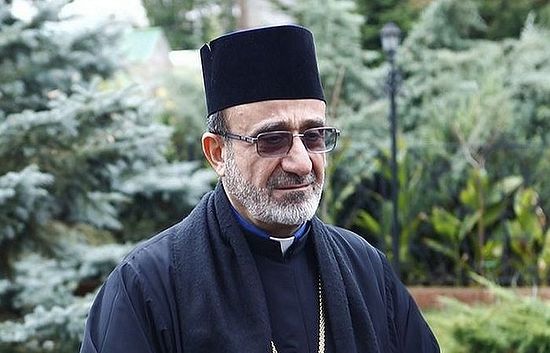 “Today not only our churches are attacked in Syria – the whole old Roman cities are eliminated and even mosques. Who has destroyed the Umayyad Mosque in Aleppo, which is the heritage of the whole world culture? Islamists-radicals did it,” the vicar of Patriarch John X bishop Qais of Erzerum said in his interview to the website of the Information and Education Department of the Moscow Patriarchate’s Ukrainian Orthodox Church.

“Why does not the United Nations raise its voice to condemn these people as criminals. Even the UNESCO keeps silence about destruction of cultural sites,” he stressed.

The Syrian hierarch also said that future of the kidnapped in 2013 metropolitans of Aleppo Paul and John Ibrahim “is absolutely indifferent to world human rights organizations.”

He also told about unusual cases that took place in Syria during the war. Two years ago a shell made a hole in the wall of the Holy Cross Church in Damask during the divine service and stopped before the icon of St. Catherine, “if it had exploded, there would have been thousands victims.”

Another incident took place in the renowned Monastery of the Nativity of the Holy Virgin. There exists a custom to make a candle in a person’s height. Once a man brought such a candle and asked a nun to light it. He gave this candle to her, went down the stairs and suffered a heart attack.

“Nuns tried to light this candle several times, but failed. Suddenly they heard that someone cried that the man needed help. They came up to him, he turned out to be a Muslim. He talked to the nuns and said: “Be careful, there is dynamite in my candle” and died right on the stair near the entry to the nunnery,” the hierarch said.

Most viewed articles
Hierarch from North Macedonia Gives Advice to the Ukrainian Orthodox Church91
Can God Break A Promise?82
Participating in God’s Vision78
Patriarch Kirill: Faith in the Lord Gives Us the Ability to Distinguish Between Good and Evil72
First Orthodox Prayer Book in Portuguese Published in Portugal71
Lessons from Saint Mary of Egypt54
Patriarch Kirill: We In No Way Question the Healing Power of the Holy Mysteries of Christ!48
Ethiopian Patriarch Thanks Patriarch Kirill For the Support During the Persecution33
Representative of Russian Patriarch Delivers Rehabilitation Facilities to Children in Syria29
Connected to Community1
Most popular authors
Pravmir.com team341
Fr. James Guirguis82
Priest Dustin Lyon78
Justin Doty54