Antiochian priest to speak at 2016 March for Marriage 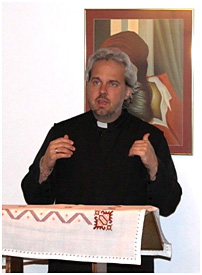 Father John Oliver, pastor of St. Elizabeth Orthodox Church (Antiochian Archdiocese) in Murfreesboro, TN, has been invited by the National Organization for Marriage to speak at the 2016 March for Marriage. The March will be held on Saturday, June 25, 2016 at the National Mall in Washington, D.C.

The peaceful demonstration—convened to express support for traditional marriage and family—will begin at the Capitol Grounds at 11:30 a.m. and end before the U.S. Supreme Court building. In 2015, the March’s inaugural year, His Eminence Metropolitan Joseph released a letter encouraging the faithful of the Antiochian Orthodox Christian Archdiocese of North America to attend the March.