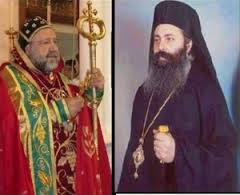 “Fanaticism has reached such an extent that Christian and Muslim spiritual leaders become the target of abduction and violence,” John of Antioch said.

“Today, from this sacred and historic pulpit, we call again everyone and the international Community to act for their immediate release,” he said and added the need for “peaceful resolution of the crisis in Syria by means of dialogue”.

John of Antioch is paying his first official visit to the Fener after his election. Patriarch Bartholomew I of Constantinople also referred to the extremely sad incident of the abduction of the two bishops.