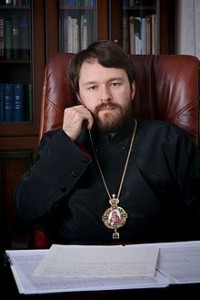 Hilarion, Metropolitan of Volokolamsk and  Chairman of the Department of External Church Relations of the Patriarchate of Moscow, revealed that Greece is under the pressure of international organizations to lift the prohibition on entry for women to Mount Athos, called avaton (Άβατον) in Greek.

In a press release he issued on the occasion of the visit of the Patriarch of Moscow and all of Russia, and Primate of the Russian Orthodox Church, Kirill I, Metropolitan Hilarion underlined that this is happening in order for Mount Athos to be opened for tourism to both sexes, “but so far Greece’s resistance on the matter is solid and we hope that it continues to be so, because any kind of changes in Athos and around it can have a fatal impact on this island of spirituality, which constitutes a common legacy for all the orthodox world.”

One of the subjects likely to be discussed between the primates of the Orthodox Churches of Greece and Russia is the Christian’s stance in the Middle East, “which has to be put forward in high tones in international talks, because in the region highly unfavorable circumstances are developed for Christians: murders are still happening, kidnappings of bishops and priests,” such as two Orthodox Bishops in Syria.

According to Metropolitan Hilarion, “The Russian Church cannot stay uninvolved. We will try to activate all international mechanisms to solve these problems.”

Most viewed articles
Words from St. Isaac of Syria176
“Do Not Weep”138
Best Films of the Pokrov Film Festival Have Been Determined121
Christ the Life Giver115
Archbishop Peter of Chicago and Mid-America in an interview to Poltava Diocese’s press service reveals interesting moments in the life of St John (Maximovich)110
(VIDEO)Celebrating 5 years of Byzanfest International Orthodox Film Festival68
Patriarch Kirill Answers Questions from Participants of the Ninth Faith and Word Festival56
The Religion of Self10
Using Our Time Wisely to Cultivate the Seeds of Faith2
Most popular authors
Pravmir.com team355
Archpriest Stephen Freeman176
Archpriest Peter Olsen138
Fr. Theodore Stylianopoulos115
Fr. Gabriel Bilas10
Priest Luke A. Veronis2