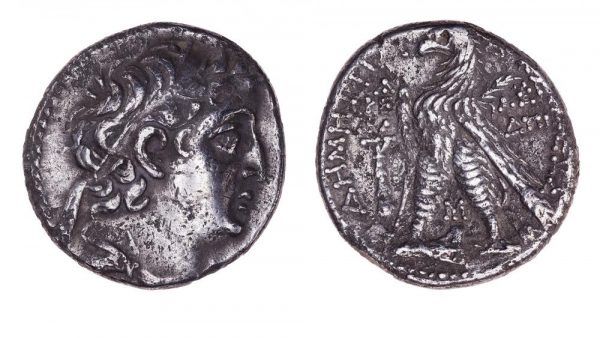 The Tower of David Museum in Jerusalem announced the discovery of a rare silver “Tyre Coin.”  This coin was likely used to pay the Temple Tax during the reign of King Herod.

“We know from the Gospels that Jesus visited Jerusalem … and we know that He talked to the money changers.  So here we have the evidence, the archaeological evidence to the historical sources,”  Eilat Lieber, the Director of the Museum told CBN News.

The museum discovered the coin during a major renovation and conservation project.  A big part of the project is the work done on the Phaesel tower built by King Herod.

In 37 BC, Herod established himself as King of Judea and began some of the most ambitious building projects in the ancient world including the reconstruction of the Second Temple.  He transformed the city of Jerusalem, so much that Pliny the Elder wrote Jerusalem was “By far the most distinguished city not in Judea only, but of the whole Orient.”

Lieber said the Tower of David connects the ages.

“You can see how the past, the present, and the future are actually here at the Tower of David.  During the work for the future of the citadel, we found the evidence from the past.  And we can actually, know more about our identity.  Christians can see how the sources, the Gospels are coming alive here in Jerusalem.”

She says their goal is to tell Jerusalem’s story.

“This is the most exciting part of our work because all we want is to bring Jerusalem to the world, the story of Jerusalem, the rich history of all of us, Jewish people, Christians from all over the world,” she added.

The coin will be part of the new exhibition at the Tower of David Museum.

Most viewed articles
On Feeling Forsaken169
Patriarch Kirill: We In No Way Question the Healing Power of the Holy Mysteries of Christ!138
Lessons from Saint Mary of Egypt124
Ethiopian Patriarch Thanks Patriarch Kirill For the Support During the Persecution107
Maronite Patriarch Thanks Russian Patriarch for His Support for Christians in the Middle East99
Food for the Journey67
Fire Destroys Main Building with the Church of St. Peter Convent in Pavlodar46
The pandemic is a significant examination for us all, Transylvania Metropolitan says46
Athens and Jerusalem: the Role of Philosophy in Faith, with Analysis by St. Gregory Palamas24
Sunday of the Samaritan Woman1
Most popular authors
Pravmir.com team390
Archpriest John Moses (+2019)169
Justin Doty124
Dcn. Michael Schlaack67
Aurelian Iftimiu46
Eric Hyde24
Archpriest Geoffrey Korz1