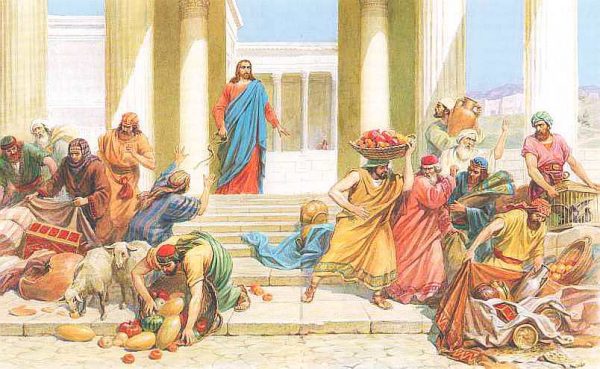 In order to justify their offenses in general and in particular their wars, some resort to this text from the Gospel: “Then Jesus went into the temple and began to drive out those who bought and sold in the temple, and overturned the tables of the money changers and the seats of those who sold doves” (Mark 11:15 and equivalent passages in the other three Gospels). They put themselves in Christ’s place in the story and put their enemies in the place of those who deserve to be killed and expelled. But is there a way of reading this text that is closer to the mind of the fathers?

The fathers found in this event a warning for themselves and for Christians in general– not for others– that gives them guidance in order not to fall into temptation, in order not to become merchants who traffic in holy things rather than faithful servants of the Church according to God’s heart. They found that this event is concerned with them, the children of the Church, more than it concerns others who do not belong to the Church. Contrary to what happens today, they placed themselves in the place of the merchants, not in the place of Christ, so that they might benefit from repentance before Christ comes and expels them.

The fathers, then, asked their followers to be careful not to fall into the trap that the temple merchants fell, lest Christ come and expel them just as He expelled those who preceded them in defiling God’s temple. Saint Ambrose of Milan (d. 397) says, rejecting human infallibility, “God does not want His temple to be a market, but a house of holiness. He does not preserve the priestly ministry as a religious duty without sincerity, but as willful obedience… He taught that the Church should not make a place for worldly commerce, and so He expelled the money-changers in particular, those who seek profit from God’s money and are unable to distinguish between good and evil.”

The Venerable Bede (d. 735), a doctor of the church, also calls believers to repent and to not behave like the merchants and money-changers in the temple so that Christ will not come and expel them. Bede says, “Christ cast the merchants and con-artists and all their lot outside, along with all those who are attached to the goods of commerce… We must avoid evil actions with great care and diligent perseverance, lest Christ come suddenly and find something evil in us as a result of which we will truly be worthy of whipping and expulsion from the Church.”

Origen (d. 235) has the same reading, as he states that, “He is zealous for God’s house in each one of us. He does not want the house of prayer to be a place for money-changers or to become a den of thieves, as He is the Son of a jealous God… These words make it clear that God does not want anything foreign to mix with His will in the soul of any one of us, especially the souls of those who desire to accept the teachings of the divine faith.”

According to these readings of the Church, we conclude that the fathers found in this passage a call to purify the Church from the money-changers who exploit their positions within it for their own interests and worldly purposes. Christ did not come to expel the children of foreign nations. He came and expelled from the temple the children of the temple who did not deserve to be children of the temple. This is confirmed by what Jesus said, citing the Old Testament: “My house shall be called a house of prayer for all nations? But you have made it a den of thieves” (Mark 11:17).

Most viewed articles
On the Dormition Fast120
Faith and Moral Freedom66
Patriarch Kirill: “The Memory of the New Martyrs will Help Us to Be Faithful to Christ amid Modern Temptations”61
Dormition Fast: Lesson on Silence51
Patronal Feast Celebrated in St. Anna Convent in Vashkivtsi37
Lord, Save Me!36
Bishop Nicholas of Manhattan visits Holy Cross Monastery in West Virginia28
Condolences of Patriarch Kirill over the death of believers in the fire that broke out in Abu-Seifein Church in Cairo14
Most popular authors
Pravmir.com team260
Archpriest Michael Gillis66
Metropolitan Anthony (Pakanich)51
Fr. Theodore Stylianopoulos36