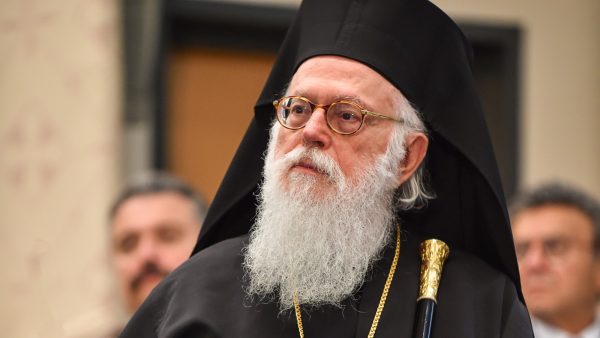 According to an announcement from Evangelismos Hospital in Athens, His Beatitude Archbishop Anastasios of Albania was released from hospital on Monday after 12 days of hospitalization.

The Archbishop will remain in quarantine at home following his discharge, reports the Orthodox Times.

Praising God for the development of this serious ordeal, he expressed his gratitude to the doctors and nurses of the Intensive Care Unit under the leadership of Professor Anastasia Kotanidou.

Archbishop of Albania thanked from the bottom of his heart with fraternal wishes the Ecumenical Patriarch Bartholomew, the Patriarchs, Theodore of Alexandria, John of Antioch, Theophilos of Jerusalem, Kirill of Moscow and the Archbishops, Ieronymos of Athens as well as the many more Hierarchs.

Finally, he wholeheartedly thanked the numerous friends, clergy and laity, known and unknown, who supported him with heartfelt wishes, noble events and spontaneous prayers throughout this period.

“Silent participation in the suffering of God’s people secretly contributes to social cohesion. Spontaneous sincere love always strengthens people in difficult times. Love is the most precious thing in the world”.

Archbishop Anastasios underwent relevant tests at a medical centre in Tirana which showed that he was infected with COVID-19. Although the symptoms were mild, the physicians in Tirana deemed necessary that the Archbishop should be hospitalised in a specialised hospital in Greece, given his age and some chronic health problems.

Archbishop Anastasios was admitted to Evangelismos Hospital to receive the appropriate treatment, and following the consent of Greek Prime Minister Kyriakos Mitsotakis, the Archbishop was transferred from Tirana to Athens with a C-130 aircraft.