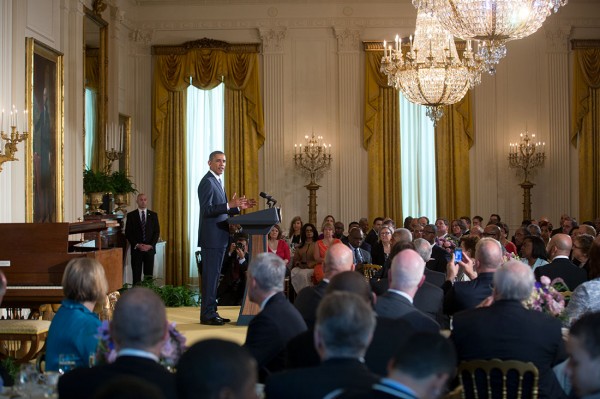 President Obama welcomed the religious leaders and at the beginning of his remarks mentioned the tragedy and violence that struck a Jewish community center and retirement home in Overland Park, Kansas, last Sunday. “No one should ever have to fear for their safety when they go to pray,” said the President in condemning the attack and the loss of innocent lives.

The President talked about the message of hope that the Resurrection of the Lord Jesus Christ brings to our world and also about his recent meeting with Pope Francis.

Archbishop Demetrios immediately following the breakfast said: “We had the honor of being in an edifying gathering hosted by President Obama, filled with the sense of pain for the Passion but also with joy for the Resurrection of the Lord. The various parts of the program were indicative of the strong faith in Christ. It is worth noting that the references to the Passion and the Resurrection of Christ were contextualized with an eye in the contemporary reality of our world.”

The White House breakfast was followed by a two-hour meeting at the adjacent Administration Building, where the religious leaders had the opportunity to be informed and discuss issues related to the protection of the youth and the assistance to areas outside the United States, plagued by conflicts and violence.