Source: Greek Reporter
The redefinition of legal marriage to include any relationship other than between a man and a woman has serious consequences, notes the Holy Eparchial Synod headed by Archbishop Demetrios of America.
Anastasios Papapostolou | 27 April 2015 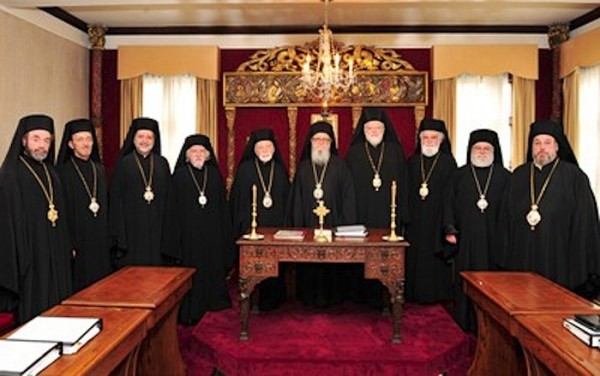 A few days before the U.S. Supreme Court hears oral arguments on the rights of states to define marriage as the union of one man and one woman, more than 30 religious leaders representing tens of millions of US citizens from diverse faith communities throughout the United States have reaffirmed their shared commitment to marriage and religious freedom. An open letter entitled “The Defense of Marriage and the Right of Religious Freedom: Reaffirming a Shared Witness” was issued to all in positions of public service on April 23.

Archbishop Demetrios of America, Chairman of the Assembly of Canonical Orthodox Bishops of the USA, signed the open letter on behalf of the Holy Eparchial Synod. He was joined by other religious leaders, including Archbishop Joseph E. Kurtz of Louisville, Kentucky, president of the U.S. Conference of Catholic Bishops (USCCB); Archbishop Salvatore Cordileone of San Francisco, chairman of the USCCB Subcommittee for the Promotion and Defense of Marriage; and Metropolitan Tikhon (OCA).

“The Orthodox Church firmly believes that marriage is a sacred institution between one man and one woman and that the protection of religious freedom helps advance a stable and free society. It is our hope and prayer that this letter will inspire others, especially those in public service, to embrace these principles,” said Archbishop Demetrios. “Unfortunately, while not all circumstances make it possible for children to be raised by both a loving mother and father, we uphold that marriage as the union of one man and one woman offers the optimal environment for the birth and raising of children. For this reason, we strongly feel that both Church and society ought to labor together to strengthen the unique bond between husband and wife.”

The religious leaders stressed the need for civility and mutual respect, writing, “Government should protect the rights of those with differing views of marriage to express their beliefs and convictions without fear of intimidation, marginalization or unwarranted charges that their values imply hostility, animosity, or hatred of others.”

The leaders close with a statement of their duty and love towards all: “In this and in all that we do, we are motivated by our duty to love God and neighbor. This love extends to all those who disagree with us on this issue. The well-being of men, women, and the children they conceive compels us to stand for marriage as between one man and one woman.”

Here’s the full letter that was signed and released by the members of the Holy Eparchial Synod:

The Defense of Marriage and the Right of Religious Freedom: Reaffirming a Shared Witness

An Open Letter from Religious Leaders to All in Positions of Public Service Released, April 23, 2015

At this significant time in our nation’s history with the institution of marriage before the United States Supreme Court, we reaffirm our commitment to promote and defend marriage—the union of one man and one woman. As religious leaders from various faith communities, we acknowledge that marriage is the foundation of the family where children are raised by a mother and a father together. Our commitment to marriage has been expressed on previous occasions, including the Letter of Shared Commitment and Letter on Marriage and Religious Liberty. This commitment is inseparable from affirming the equal dignity of all people and the necessity of protecting their basic rights.

The state has a compelling interest in maintaining marriage as it has been understood across faiths and cultures for millennia because it has a compelling interest in the well-being of children. Every child has a mother and a father, and every child deserves the opportunity, whenever possible, to be raised by his or her own married mother and father in a stable, loving home. Marriage as the union of a man and a woman is the only institution that encourages and safeguards the connection between children and their mother and father. Although this connection cannot always be realized and sustained—and many single parents, for example, are heroic in their efforts to raise their children—it is in the best interests of the state to encourage and uphold the family founded on marriage and to afford the union of husband and wife unique legal protection and reinforcement.

The redefinition of legal marriage to include any other type of relationship has serious consequences, especially for religious freedom. It changes every law involving marital status, requiring that other such relationships be treated as if they were the same as the marital relationship of a man and a woman. No person or community, including religious organizations and individuals of faith, should be forced to accept this redefinition. For many people, accepting a redefinition of marriage would be to act against their conscience and to deny their religious beliefs and moral convictions. Government should protect the rights of those with differing views of marriage to express their beliefs and convictions without fear of intimidation, marginalization or unwarranted charges that their values imply hostility, animosity, or hatred of others.

In this and in all that we do, we are motivated by our duty to love God and neighbor. This love extends to all those who disagree with us on this issue. The well-being of men, women, and the children they conceive compels us to stand for marriage as the union of one man and one woman. We call for the preservation of the unique meaning of marriage in the law, and for renewed respect for religious freedom and for the conscience rights of all in accord with the common good.

The parade celebrates the 194th anniversary of Greek Independence and the achievements of the Greek American community. Organized…