The Panepirotic Federation of America (POA) strongly condemns the brutal attack on a Greek Orthodox church in the city of Premet in southern Albania on August 16 by hired government thugs who smashed icons and crosses and beat up worshippers trying to defend the only Christian house of worship in the city. 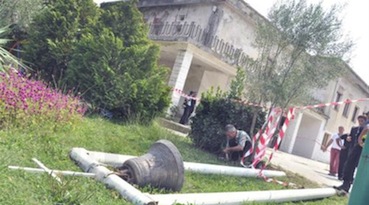 “The attack on the Church of the Vergin Mary, on the morning after her feast day, revived ugly memories of past attempts by government agencies of outgoing Prime Minister Sali Berisha to harass, intimidate and brutalize ethnic Greek Orthodox communities in Albania,” said POA President Demetrios Koutoulas. “The conduct of municipal authorities in Premet, with the obvious consent of the Berisha government, was outrageous and far from responsible behavior for a country seeking to enter the European Union.”

He called on the Obama Administration and the U.S. Congress to pressure the Albanian government to return the church to the Orthodox Christians of Premet who venerate it and whose ancestors built it.

The church served Orthodox Chrisitians in the area for decades until 1967 when Stalinist dictator Enver Hoxha outlawed all religious worship in the country and it was turned into a cultural center. After the collapse of Communism in Albania in 1991 and the Orthodox Church was re-established in the country, it became a church once gain and used for worship until August 16 when security forces hired by the Mayor of Premet Gilberto Giatse moved into the church, beat up priests and worshipers, smashed icons and crosses and announced the municipality was reclaiming the building as a cultural center.

The actions were immediately condemned by the Greek government, the Orthodox Church of Albania, political action groups representing ethnic Greeks in the country and human rights organizations in the region.

Greek Foreign Minister Evangelos Venizelos sent a demarche to Tirana protesting the actions of municipal authorities in Premet and calling for the return of the church.

Archbishop Anstastasios, the primate of the Orthodox Church of Albania, called the brutal actions in Premet an attack not only on the Orthodox Church but also on Albania itself. “We are moved to ask if we find ourselves in 2013 where we enjoy democracy and have hopes of entering the European Union or if we are reliving the nightmare of 1967 when an atheistic party believed that it could uproot forever the religious faith of the Albanian people,” he said in a statement.
OMONIA, the political action group representing the ethnic Greek minority in Albania, disputed the claims of Premeti municipal authorities that they had court sanction to return the church to a cultural center. “A questionable court decision cannot be used as an excuse to desecrate in such a violent way an established holy site,” the group declared.
KEAD and MEGA, two political parties in Albania supported by ethnic Greeks and Orthodox Christians in the country, also protested the attack on the Premeti Church.

Evangelos Doules, the president of KEAD and a member of the Albanian Parliament, said the attack reminds the world that Albania is the only country that declared war on God “turning into stables, warehouses and cultural centers the houses of worship of its religious communities.”

Kristaq Kristaqis, the presdent of MEGA, said the violence against the Church of the Vergin in Premet “reflects the rage with which certain political groups in Albania view everything that is Greek or Orthodox.”

Human rights groups in the region called on Albanian authorities to end the occupation of the church and find other space for a cultural center.

The parade celebrates the 194th anniversary of Greek Independence and the achievements of the Greek American community. Organized…