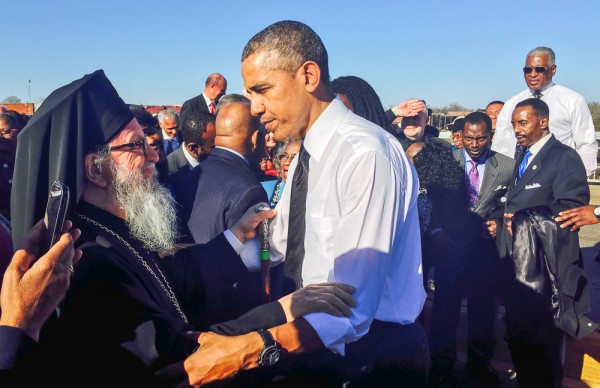 On March 15, 1965, Archbishop Iakovos of North and South America had come here and participated in the March on Selma, led by the Rev. Dr. Martin Luther King, Jr. Upon his arrival to Selma, Archbishop Demetrios noted, “It is truly a blessing to travel to Selma to pay tribute to the legacy of both Dr. King and Archbishop Iakovos. The promotion and protection of civil rights transcends politics since the ability to determine one’s future is a God-given blessing.”

His Eminence had the opportunity to greet President Obama, the First Lady and their daughters Malia and Sasha in a private holding room prior to the 50th anniversary commemoration rally. Following the presidential address, Archbishop Demetrios marched with President Barack Obama and his family, former President George W. Bush and his wife Laura, U.S. Senators and Congressmen, and leaders who had participated in the 1965 events.

After thanking everyone for their participation and before departing, President Obama embraced Archbishop Demetrios and noted the significance of faith in the Civil Rights Movement. Congressman John Lewis, who walked the bridge on Bloody Sunday 50 years prior, asked Archbishop Demetrios to offer a prayer for the people of Selma and for the Nation.

At the conclusion of the events Archbishop Demetrios made the following statement to the Press: “Today we remember the fight, the faith, the persistence and the dream of Dr. Martin Luther King, Jr. and we also remember the courage of Archbishop Iakovos of blessed memory and their time together here in Selma. It is a very significant and moving day, a day of deep emotions, thankfulness to God for what was achieved, and fervent prayer for the work that lies ahead.”

As the Archbishop of America and the successor of Archbishop Iakovos, a staunch supporter of the Civil Rights Movement and the highest-ranking religious leader to march alongside Dr. King in Selma in 1965, Archbishop Demetrios continues the longstanding legacy of the Orthodox Church to fight against racism and to defend human rights.

Archbishop Demetrios of America is the leader of the Greek Orthodox Church in America and the Exarch of the Ecumenical Patriarchate. He is also the Chairman of the Assembly of Canonical Orthodox Bishops of the United States of America.

Most viewed articles
The Cross, the Goo, and the Butterfly82
Bp Timotei: Orthodox Youth Association members are Christ’s “mystical disciples” who are not ashamed to profess Him56
St Alexander Nevsky Cathedral in Howell, NJ, Hosts Diocesan Celebrations of the 800th Anniversary of Its Patron Saint43
Will Everyone Be Saved?35
A Noetic Life34
Metropolitan JOSEPH’S Encyclical for the Year of Youth15
We Must Pray for All: The Salvation of the World According to St Silouan1
Most popular authors
Fr. Jeremy82
Aurelian Iftimiu56
Pravmir.com team43
Jacob Sparks35
Archpriest Stephen Freeman33
Archbishop Joseph of New York and Metropolitan of All North America15
Metropolitan Kallistos (Ware)1
Maria Trushanina1