Source: Greek Orthodox Archdiocese of America
Natalya Mihailova | 13 May 2015
May 11, 2015. WASHINGTON – The Greek Orthodox Cathedral of Saint Sophia in the Nation’s Capital was consecrated yesterday, Sunday, May 10, 2015, with His Eminence Archbishop Demetrios of America presiding and more than a thousand people in attendance. 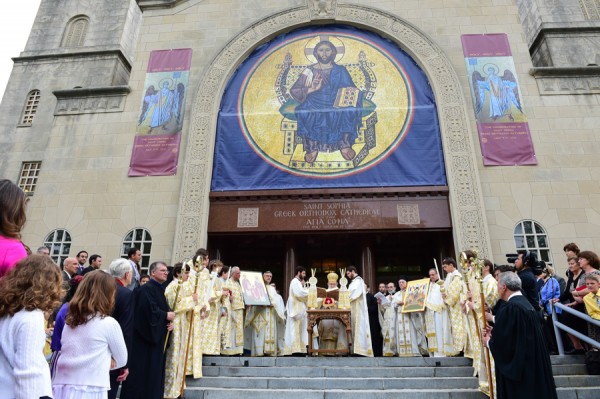 The Archbishop raised and held high the covered silver platen with the holy relics as he walked around the church.  Altar boys holding candles and icons, the choir of chanters chanting Glory to You, our God, glory to You, the clergy bearing the sacred Cross and the Gospel book preceded the procession. The faithful followed. After the readings of the Epistles and Gospels, Archbishop Demetrios together with His Grace Bishop Andonios of Phasiane tapped the front doors of the church with the episcopal staff and with a loud voice exclaimed: “Lift up the gates, O you rulers, and be lifted up, you everlasting doors and the King of glory shall enter.”

Upon entering the church, the Archbishop set the silver platen with the holy relics upon the holy altar table, ceremonially placed them in a small silver container and poured holy myrrh in it. He then deposited the silver container into the prepared reliquary cavity atop the holy altar table and poured liquid wax and mastic, sealing the cavity with a piece of marble and the wax mixture. At that point, Archbishop Demetrios and Bishop Andonios put on a white linen garment over their vestments, and kneeling down along with the clergy and the faithful offered the prayers of consecration. They washed with soap and water and anointed the holy altar table with holy myrrh. The holy table was then wiped dry with the antimensia and four linen icons depicting the four evangelists were affixed with wax on the four corners. The Archbishop then spread upon the altar table a white linen cloth katasarkion (burial shroud) and signed it. Bishop Andonios signed it as well. They vested the altar table with a new and bright cover, placed the antimension on top and then top of that the holy Gospel. They also placed upon the holy table the artophorion and the other liturgical items. Just before the conclusion of the Order of the Consecration, Archbishop Demetrios and Bishop Andonios using a sponge anointed with holy myrrh the whole sanctuary including the icons and the mosaics on the walls.

Archbishop Demetrios in his homily to the congregation commended the community of Saint Sophia for its steadfast Christian Orthodox witness in the Nation’s Capital for over a century. He said that the consecration of a church invites us also to be consecrated anew in our faith and in the teachings of our Lord and His Gospel. At another point, His Eminence said that we also pray for Cyprus, that it will be united again and will be renewed in the same spirit after more than 40 years of occupation. Finally, Archbishop Demetrios conveyed the Patriarchal blessings, love and best wishes of His All Holiness Ecumenical Patriarch Bartholomew, on whose request, as he said, he bestowed the offikion of Protopresbyter of the Ecumenical Patriarchate to the dean of the Cathedral, Rev. Dr. Steven Zorzos.

After the dismissal of the Divine Liturgy, His Eminence distributed as a blessing to all in the congregation, a piece of the white linen garment worn by the hierarchs over their vestments, during the service of the consecration.

Saint Sophia’s Consecration weekend began Saturday, May 9, 2015. His Eminence Archbishop Demetrios met with groups of children of the community, in the church sanctuary and their classrooms, in the adjacent Frosene Education Center. He observed the various activities and learned of the many programs that flourish in the parish. Later in the afternoon, Archbishop Demetrios of America and Bishop Andonios of Phasiane presided at the service of the preparation of the Holy Relics and the festal and panegyrical Archieratical Vespers. In the sermon, offered by Bishop Andonios of Phasiane, His Grace spoke about the historical basis of the service of Consecration and about the lives of the Saints, whose relics were to be used for the consecration. He said, the Consecration of the Cathedral of Saint Sophia gives us all the opportunity to consecrate ourselves as well, to re-baptize, renew and rededicate ourselves, just as in the Holy Sacrament of Baptism. In the evening, a celebratory grand banquet followed in Washington’ s Ritz-Carlton Hotel.