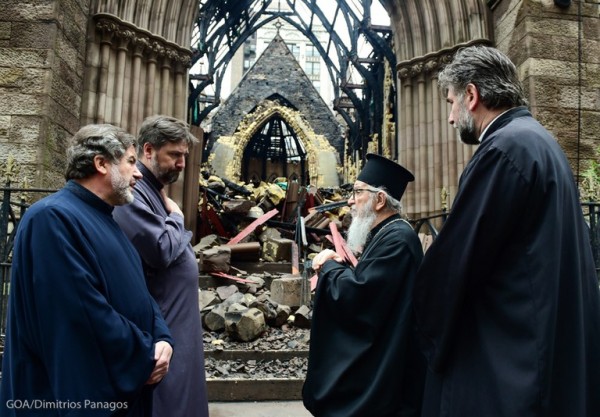 Archbishop Demetrios, moved by the view of the total destruction stated:

“We stand in front of the historic Saint Sava Cathedral of the Serbian Orthodox Church in New York that sustained an unprecedented destruction by fire. It’s a pity really because it was a church with a long history and such structures cannot be easily rebuilt. We are here with the dean of this Cathedral and other priests of the Serbian Orthodox Church. It is clear that they are willing and determined to rebuild the church, which was destroyed, so that this congregation that has been worshiping God in this church for many decades, will have their Cathedral again. We, as Greek Orthodox Archdiocese, stand by them and will make available to them any of our neighboring churches to use for their liturgical needs, while they face this emergency situation.”

The Dean of the St. Savas Cathedral, the V. Reverend Fr. Djokan Majstovic, who was on location to receive the Archbishop said:

“I was so blessed today to have His Eminence visiting with all of you. It means so much to me and to my community and I am going to pass the message through. His Eminence was always very supportive of us, very kind and very helpful. So thank you very much.”