Natalya Mihailova | 13 September 2016
On September 7, 2016, Archbishop Feofan of Berlin and Germany met with the President of the German Bishops’ Conference Cardinal Reinhard Marx, Archbishop of Munich and Freising, in Munich. 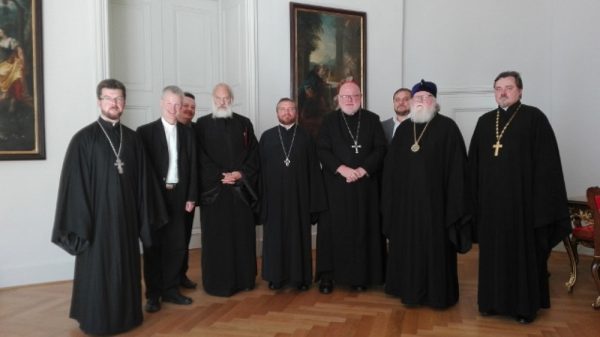 They discussed the results of the meeting between Patriarch Kirill of Moscow and All Russia and Pope Francis, which took place on February 12, 2016, in Havana, and underscored the need for close cooperation and development of contacts between the Diocese of Berlin and the Catholic Bishops’ Conference. Archbishop Feofan spoke about the present state of the dialogue between the German Bishops’ Conference and the Russian Orthodox Church, which has been maintained for several years as joint theological conversations. The latest talks, which are co-chaired by His Eminence Feofan, took place in June 2016 in St. Petersburg.

Special attention at the meeting was given to problems of integrating refugees, especially young people, in the German society, as well as contacts with representatives of Christian communities of various confessions who preserve their ethnic and religious traditions.

Archbishop Feofan informed Cardinal Marx about the history and current affairs of the Diocese of Berlin, development of parish life and social and cultural projects carried out on local and diocesan levels.

Among the matters considered were also problems involved in a project for building an Orthodox church and a religious-cultural center in Munich.

The meeting was attended by Msgr. Thomas Schlichting, representative of the Vicar General of the Diocese of Munich and Freising; the Rev. Simon Tirolt, secretary to the archbishop; Hegumen Maxim (Schmidt), representative of the Southern Deanery of the Diocese of Berlin; Archpriest Nikolay Zabelich, rector of the Parish of the Resurrection in Munich; Rev. Yevgeny Murzin, head of the diocesan information department; and Sub-Deacon Nikolay Ton, general secretary of the Orthodox Bishops’ Conference in Germany, the website of the ROC Diocese of Berlin and Germany reports.