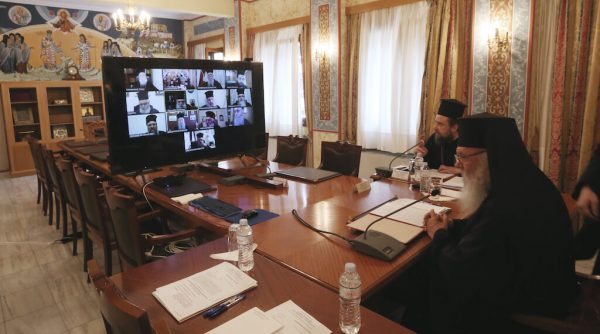 The Church of Greece reaffirms her confidence in the State, but also stresses the need for issues of ecclesiastical order and worship to be respected, reports Orthodox Times.

During the meeting of the Holy Synod, Archbishop Ieronymos called for all churches to be allowed to perform the services from April 11 and onwards, without the limitation of the necessary condition for having a television, radio or internet online coverage, but with the same limitation regarding the number of attendees, “unless the State relaxes the measure, so, of course more people will be allowed to attend. ”

At the moment, services in camera are permitted to be held, provided there is a television, radio or internet online coverage.

In addition, the Archbishop urges the Metropolitans, Auxiliary Bishops and Titular hierarchs, as well as the Director General of the Central Financial Services (EKIO) of the Church of Greece to offer for the months April and May 2020 half of their net earnings for the immediate purchase of ventilators for the referral hospitals for Coronavirus.

In particular, during the meeting – which was held via teleconference – Archbishop of Athens emphasized that “with a sense of responsibility we reaffirm our confidence in the State, which is due to the cementing of the relationship that has been cultivated between the two institutions over the past decades, but also in the light of the responsible attitude shown by the state, political and ecclesiastical institutions in the current health crisis.”

However, he makes it clear that according to the dogmatic teaching of the Orthodox Church, “the purpose of life in Christ is to unite with Jesus Christ and to effectuate this in the world. In this context, the Church invites everyone in secret unity through the spiritual participation in the shared Cup of Life, that is, the body and blood of our Lord Jesus Christ through the unceasing performance of the Holy Communion.”

He notes that with his proposals “the Holy Communion will continue to be offered to the people without questioning the legality and regularity of this service under the existing State and Church law.”

Also, the bells of the Churches will ring according to the plan of each Metropolis, inviting the faithful to participate in the common prayer from their homes.

It is also permissible to perform rites in the monasteries behind closed doors with the participation of only members of each monastic Brotherhood of the Holy Monastery.

In the Holy Cemeteries, the priests are allowed to hold a Trisagion service at the request of the relatives of the deceased, while only two relatives will be able to attend the service.

The Directorate General of the Central Financial Services (EKIO) of the Church of Greece also undertakes to allocate the maximum possible amount of money for the purchase of equipment and other health materials necessary for the referral hospitals for the Pandemic, the Hellenic Army and the security forces of our homeland.

Furthermore, the Church of Greece in cooperation with the “APOSTOLI” NGO of the Holy Archdiocese of Athens make available to the State the community clinics and the parish network infrastructures all around the country.