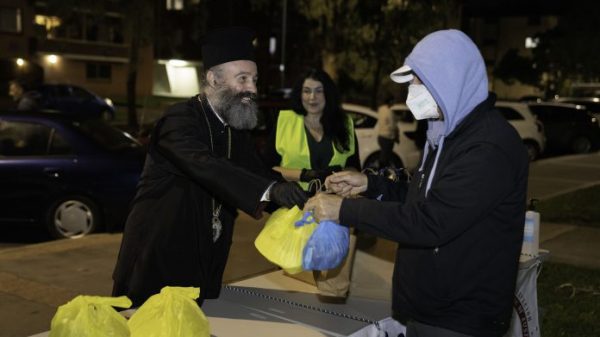 His Eminence Archbishop Makarios attended Sydney’s Hart Park, near Liverpool on Tuesday afternoon, the 5th May, participating in a new “Homeless Feed” program.

The Homeless Feed program has been successfully implemented by members of the Church of Saints Raphael, Nicholas and Irene in Liverpool, which is aimed at helping those who are homeless as well as other people that are in need of food supplies.

The program commenced with the blessing of His Eminence Archbishop Makarios, who was welcomed by the Parish Priest of the Church of Saints Raphael, Nicholas and Irene, the Very Reverend Archimandrite Prohoros Anastasiadis and members of the Ladies Philoptochos of Liverpool.

The program embraces the wider district of Liverpool, gaining the support of the local authorities and actively helping members of the community by offering food items and packaged meals. The program feeds about 40 people every Tuesday by providing packaged meals that have been prepared by the women of the Ladies Philoptochos of the Parish of Saints Raphael, Nicholas and Irene.

Prior to the the imposing of social distancing measures, the meals were prepared on site, with the program helping the community bring a friendly atmosphere of love and camaraderie.

During his visit to Hart Park, His Eminence Archbishop Makarios spoke with the volunteers and congratulated them for their God-pleasing work. He encouraged them to continue with the same zeal and fervour and then did not hesitate to put on the gloves himself, observing the required protective measures, and to assist with the distribution of the meals.

His Eminence also praised Fr Prohoros for the program’s excellent organisation and indicated that it may be used as a model for similar initiatives taking place through other parishes of the Greek Orthodox Archdiocese.

The Greek Orthodox Archdiocese of Australia notes that many similar schemes are being undertaken throughout Australia and His Eminence expressed the desire and expectation that they intensify their efforts and become even further organised to better meet the great needs faced by our fellow human beings.

The Greek Orthodox Archdiocese of Australia also adds that “Homeless Feed” is open to all people without exception and does not discriminate on the basis of race, religion, nationality or anything else. His Eminence characteristically points out, “we look at the face of our fellow human being, whoever they may be”.