Archbishop Mitrophan of Horlivka: “When We Had Peace, We Did Not Value It”

Source: Pravmir (Translated from the Russian)
Natalya Mihailova | 25 September 2014
September 23, 2014. Archbishop Mitrophan of Horlivka and Sloviansk celebrated the Divine Liturgy at the Church of the Nativity of the Most Holy Theotokos in Horlivka on September 21. 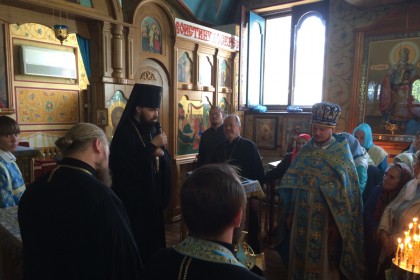 The press office of the Horlivka and Sloviansk Diocese reported that a procession took place around the church following the Liturgy.

At the end of the divine service, Archbishop Mitrophan delivered a sermon in which he stated:

“There are things that we cannot understand until we experience them. When we had peace we did not value it, or rather we took it for granted. Since our schooldays, we have celebrated Victory Day (May 9) and heard that peace is the most crucial thing. However, we did not understand what peace was, because we had always had it since our birth. And nobody was taking it away from us. But today, when we do not have peace, we understand how happy we used to be.

“Everything used to be fine. Of course, we had problems and difficulties in our lives, both personal and social. But we had the most important thing: people did not kill each other. Today we do not have the same situation, but we want to return it. We are praying, ‘Lord bring peace to us and then we will somehow build and repair our houses, and we will learn to live a normal life as long as we have peace and no war.’

“Imagine how people anticipated the Savior coming to this world. Before the Fall of man, people did not know how to live without God. However, when they lost Him and were expelled from Paradise, they saw that everything was not as simple as they had thought: sometimes storms occurred, there were wild animals, hostilities began, and other ‘delights’ of a life without God, due to which people lose their orientation and the meaning of life. People wished somebody could give everything back to them.

“And they had a promise. The Lord told them that a time would come when a woman would give birth to the One Who will return everything back: ‘Her seed shall bruise the head of the serpent’. And all the history of the Old Testament with its Prophets, the Law, and all the unusual events is the history of how people waited for the fulfillment of this promise, the way they were looking forward to dawn, for the appearance of the sun and the moment it would become warm again. The forerunner of this dawn has become the birth of the Virgin Mary.”