Source: DECR
Natalya Mihailova | 14 February 2017
From February 11-13, Archbishop Sergiy of Solnechnogorsk, chancellor of the Moscow Patriarchate in East and South Asia, was on a visit to Vietnam. 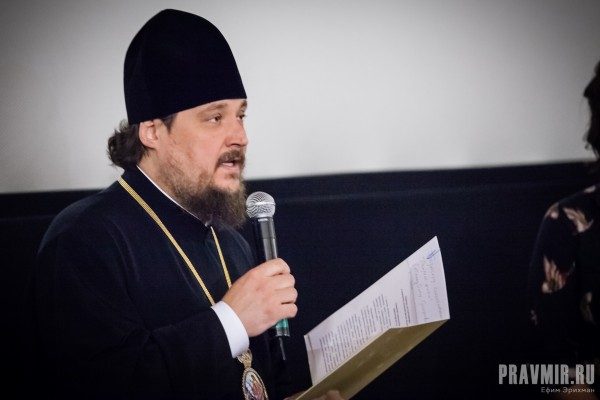 On February 11, His Eminence and his party were met at the Hanoi airport by Russian Ambassador to the Socialist Republic of Vietnam K. Vnukov and Russian diplomats.

On the same day, His Eminence met with the deputy head of the Government’s Committee for Religious Affairs, Duong Ngoc Tan. They exchanged opinions on organizing the Russian Orthodox Church’s pastoral care for Russian-speaking compatriots in Vietnam, noting the positive experience of the work carried out by the Parish of Our Lady of Kazan in Vung Tau, which has been established by the ROC Holy Synod after the visit made by Metropolitan Kirill of Smolensk and Kaliningrad (now Patriarch of Moscow and All Russia) to Vietnam in November 2001. They also discussed prospects for cooperation and development of humanitarian interaction in the religious sphere between Russia and Vietnam.

In the evening, Archbishop Sergiy met with Ambassador K.Vnukov. They considered a wide range of issues concerning organization of pastoral care for compatriots in Hanoi and other cities in Vietnam. The archbishop presented the ambassador with the ROC jubilee medal ‘In Memory of the Millennium of the Demise of Prince Vladimir Equal-to-the-Apostles’ awarded him by His Holiness Patriarch Kirill of Moscow and All Russia.

On February 12, the Sunday of the Prodigal Son, Archbishop Sergiy celebrated the Divine Liturgy at the Russian Center of Science and Culture in Hanoi. It was attended by numerous faithful from Russia, Greece, various cities in Vietnam and other countries; over 50 people communicated. Among the worshippers were Russian diplomats and members of the delegation of the Russian Orthodox Church.

Addressing the worshippers, Archbishop Sergiy conveyed them greetings from His Holiness Patriarch Kirill, who was the first hierarch of the Russian Orthodox Church to visit the capital city of Vietnam, in 2001. His Eminence spoke at length about the spiritual meaning of the Sunday divine services preceding Lent.

Mr. A. Gankin greeted His Eminence on behalf of the Russian Orthodox community in Hanoi. He thanked Patriarch Kirill for his care for the faithful in Asia including Vietnam. He also thanked Archbishop Sergiy for the celebration, his homily and his work to organize the life of Orthodox communities in South-East Asia.

In response to an earlier request of the compatriots to establish a ROC parish in Hanoi, Archbishop Sergiy, after a discussion with the faithful, gave his blessing upon the forming of a community dedicated to Blessed Xenia of St. Petersburg and called everyone to lift up ardent prayers to this woman of God, now the patron saint of the parish in Vietnam.

Most viewed articles
Be Thou My Battle Shield100
Why Believe? Part 4 – Discovering the Power of God80
It’s All About the Resurrection – Reflecting on the Season71
Metropolitan Onuphry: Humility Leads Person to God’s Grace69
Bishop Irenei Addresses a Symposium on “The Mother of God in Our Lives” in Los Angeles65
Russian Church to Help Provide Lebanon with Vaccines Against Coronavirus55
Orthodox Church Damaged by Earthquake Restored in Philippines50
Growing Cold in Faith after a Few Years in Church: Is This Normal?1
How to Survive in Modern City. 8 Essential Conditions1
Most popular authors
Pravmir.com team239
Archpriest Lawrence Farley100
Priest Luke A. Veronis80
Archpriest Gabriel Rochelle71
Archpriest Nikolai Markovsky1
Fr. Andrei Gavrilenko1