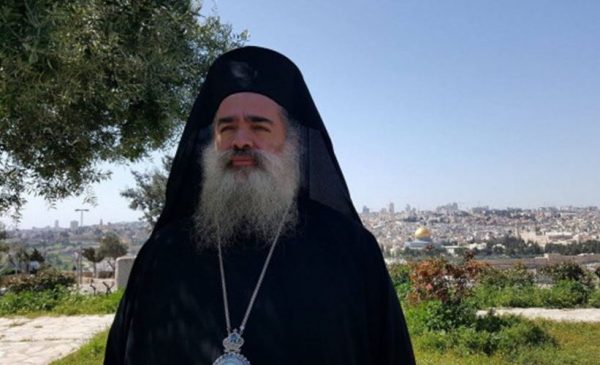 The hostile attitude of Western countries towards His Holiness Patriarch Kirill of Moscow and All Russia was brought to notice by Archbishop Theodosios of Sebastia, a hierarch of the Orthodox Church of Jerusalem, in his personal statement made on July 15, 2022. The archpastor stressed in particular:

We in the Holy City of Jerusalem express regret and condemn the actions undertaken by political forces in the West against the Russian Orthodox Church and her Primate – His Holiness Patriarch Kirill of Moscow and All Russia.

Recently, Canada has included the name of His Holiness Patriarch Kirill of Moscow and All Russia in a sanction list. This lawlessness is also supported by other Western countries. We perceived such actions as part of one large-scale plan aimed to weaken the role and authority of the Orthodox Church, her spiritual mission in the modern world and destruction of the moral values she preaches.

Expressing our full support for the Russian Orthodox Church and her Primate, we reaffirm our categorically negative attitude to all the provocations and unlawful actions that the West aims against them. This Western power, which extolls democracy and human rights while supporting same-sex marriages and other things impossible to be approved and accepted by human reason, is assaulting Patriarch Kirill today, who is the spiritual pastor of the faithful of the Russian Orthodox Church both inside and outside Russia.

We appeal to all the official church leaders to support our stand condemning all the actions aimed against the Patriarch of Moscow and All Russia. We lift up our prayers for the cessation of war in Ukraine and all other wars in our world, for the restoration of peace and justice in the Holy Land and especially in the Holy City of Jerusalem so that our Palestinian people may flourish living in freedom they deserve.

We express confidence that the provocations undertaken by Western forces will not be able to influence the lofty authority that His Holiness Patriarch Kirill of Moscow and All Russia enjoys among the Russian people and all the faithful he spiritually nourishes from East to West.

We look forward to an opportunity for resolving in the spirit of love and wisdom the differences and divisions within the Orthodox Church which resulted from the anti-canonical actions around the Ukrainian ecclesial issue. The Orthodox Church stands today in a special need of the wisdom of spiritual leaders who could launch an initiative to overcome the complicated situation in which she has found herself. An especially painful problem, which needs to be resolved as soon as possible, is the broken communion between the two Sister Churches – those of Russia and Constantinople.

I would like once again to express confidence that any dispute and any disagreement can be resolved through dialogue in a good intension tone. We hope that all the present differences will be resolved since we are One Church and we have one faith. In today’s world, unfortunately, atheistic tendencies are increasing aiming at the assertion of an anti-Christian culture contrary to moral values preached by the Church of Christ – the values we all are called to defend.