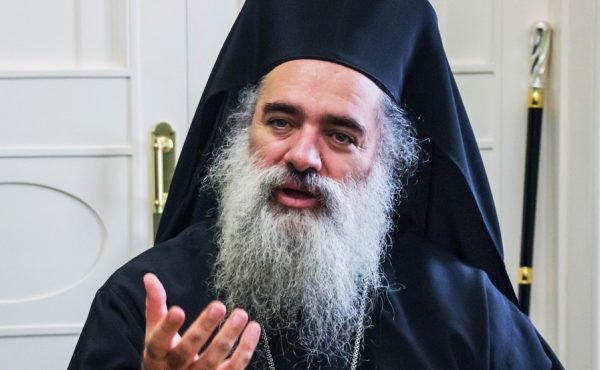 On June 18, Archbishop Theodosios of Sebastia, a hierarch of the Orthodox Church of Jerusalem, received in audience a group of British journalists – representatives of various news agencies. In the talk with them, His Eminence Theodosios stated in particular:

“We are categorically against all kinds of provocations carried out by some Western forces against His Holiness Patriarch Kirill of Moscow and All Russia. We cannot silently see such attacks, which we consider to be illegal, inappropriate actions against a religious person of a high standard, who is a true spiritual symbol of modern Orthodoxy. His Holiness Patriarch Kirill does not participate in any political conflict. He, as a man of peace, is always in favour of dialogue. We as a part of the Orthodox Church, proceeding from our moral and religious convictions, reject as well all kinds of wars, every manifestation of violence in any region of the world.

The accusations against Patriarch Kirill are false and unfounded. I would like to emphasize again that His Holiness always called on all sides to reconcile, to renounce wars and violence.

Today we call upon those who engage in incitement in the West against Patriarch Kirill to abandon their aggressive attitude not only against His Holiness but also against the entire Orthodox Church.

We express prayerful support for the Russian Orthodox Church and her Primate, Patriarch Kirill. We ask God for an end of the war in Ukraine, for a possibility for settling all the political differences through dialogue and adoption of well-considered decisions.

His Holiness Patriarch Kirill is the Primate for more than 100 million believers, not only from Russia and Ukraine, but also from many other countries of the world. Coming from his lips were always sermons about love, peace, and mercy, as well as calls for reconciliation of all parties to the conflict, but also a rejection of all forms of violence and terrorism”.