Source: Greek Orthodox Archdiocese of America
Natalya Mihailova | 01 June 2015
SAN FRANCISCO – His Eminence Archbishop Demetrios of America announced today (May 29, 2015) with great sadness, during the meetings of the Archdiocesan Council, the falling asleep in the Lord of His Grace Bishop Anthimos of Olympos, age 80, in his residence in West Yarmouth, Massachusetts. Following the announcement the Archbishop offered a trisagion memorial service, in the Archdiocesan Council meeting room. 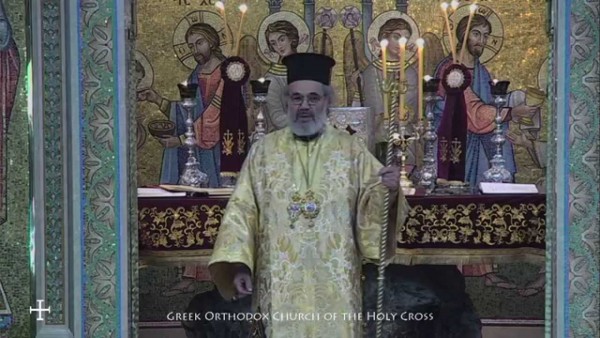 Born as George Draconakis in Kasteli, Crete on November 19, 1934 to Nikolaos and Kalliope, he was drawn to the church from a young age and followed the calling of the Lord. He was a graduate of the Patriarchal Theological School of Halki where he received his Master of Divinity degree.

Bishop Anthimos was a close friend of Metropolitan Anthony of San Francisco of blessed memory, both having been born and raised in Crete. His Grace was a frequent visitor to the Metropolis of San Francisco. He loved attending the annual Folk Dance and Choral Festival; was a great supporter of Saint Nicholas Ranch and Retreat Center and the Monastery of the Theotokos the Life Giving Spring in Dunlap, California; and was a beloved friend and spiritual father for many faithful through the country.

Bishop Anthimos is survived by his brother, Rev. Fr. Konstantinos Draconakis, who had served as a priest in Germany for many years, and is now retired and resides in Crete. He had expressed the wish to be entombed in his motherland, in Kasteli Fournis near Neapolis in Crete. May his memory be eternal!

Funeral and viewing arrangements will be forthcoming.