Source: Greek Orthodox Archdiocese of America
Natalya Mihailova | 06 May 2014
NEW YORK – The Holy and Sacred Synod of the Ecumenical Patriarchate of Constantinople elected unanimously today the Very Reverend Archimandrite Cleopas Strongylis Metropolitan of Sweden and All Scandinavia. His Grace Metropolitan elect Cleopas Strongylis has been serving as the Dean of the Annunciation Cathedral in Boston, Massachusetts. 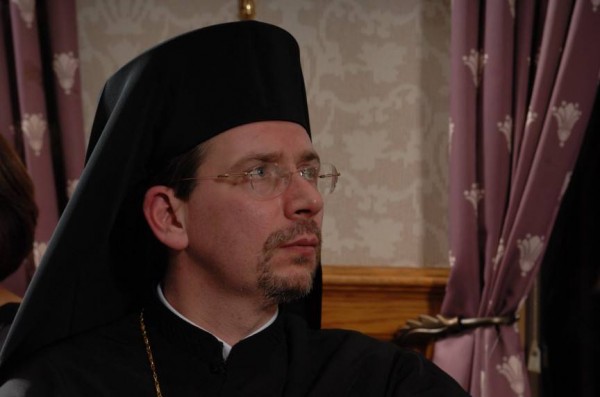 His Eminence Archhbishop Demetrios of America upon the announcement of the election stated: “We congratulate His Grace, Metropolitan-elect of Sweden and All Scandinavia, Cleopas Strongylis on his election and wish him strength and grace from above as he will shepherd parishes in Sweden, Denmark, Iceland and Norway. May the grace of our Lord Jesus Christ be always with the newly elected Metropolitan in his new diakonia.”

Metropolitan-elect Cleopas was born in Nea Smyrni, Athens, in 1966. He completed his primary education in Athens and was then admitted on scholarship to the Rizareios Ecclesiastical High School from where he graduated in 1984. He furthered his studies at the Theological School of the University of Athens, graduating in 1988, and then attended a two-year graduate studies program in Canon Law at the same University. His Grace continued graduate studies at Durham Theological School, in England, where he was awarded a Master of Arts degree in 1992. In 1994 he graduated summa cum laude from Holy Cross Greek Orthodox School of Theology, in Brookline, Mass., with a Master’s degree in Sacred Theology. He continued with doctoral studies in the Old and the New Testament at Boston University Theological School and Harvard Divinity School. In 1996 he was awarded a Doctorate of Theology from the Theological School of the Aristotelian University of Thessaloniki.

He was ordained a Deacon in 1989 and a Presbyter in August 1992, by Metropolitan Cleopas of Thessaliotis, Greece, who also bestowed upon him the offikion of Archimandrite. While at Holy Cross Greek Orthodox School of Theology, he worked as personal theological secretary of Metropolitan Methodios of Boston, who at the time was serving as President of Hellenic College / Holy Cross. Immediately afterwards, he was appointed Director of the Department of Registry and Adjunct Professor of Patristics, teaching at the Seminary’s graduate school for three years.

In December 1996, he was appointed as the Presiding Priest of the parish of Transfiguration in Corona, NY, where he served until 2004, and then to the Greek Orthodox Community of Holy Trinity, in Lowell, Mass., (2004-2009). Since March 2009, His Grace has been serving as Dean of the Annunciation Cathedral in Boston, and has also served as Director of Greek Education for the Greek Orthodox Metropolis of Boston.  During his service in New York and Boston he taught at high school and college levels. He has published nine books and many papers in various prestigious theological and historical journals. He is fluent in Greek, English and Hebrew and has knowledge of Latin, French and Italian.

Most viewed articles
Seven Lessons for the New Year from St. Seraphim of Sarov246
A Great Time to Join the Orthodox Church206
New Jersey Governor Signs Bill Legalizing Abortion Up To Moment of Birth107
The Way of Christ Is The Way of Love75
Metropolitan Hilarion Celebrates the 20th Anniversary of His Episcopal Consecration59
Brooklyn Street Co-Named for Antiochian Pastor Who Served a Half Century There52
Metropolitan Hilarion: the Church and traditional confessions have done everything possible to improve the situation in Kazakhstan49
My World’s Different10
Sunday of the Samaritan Woman1
How We Worship: the Struggle of the American Experience1
Most popular authors
Priest Luke A. Veronis246
Frederica Matthewes-Green206
Pravmir.com team108
Ryan Foley107
Fr. Theodore Stylianopoulos75
Peter Samore52
Protopresbyter Themistoklis Mourtzanos10