Archimandrite Irinei (Steenberg) Speaks at the Forum “The Legacy of Patristic Tradition in the Monasticism of the Russian Church,” Part of the 23rd International Nativity Educational Readings in Moscow

Source: ROCOR
Natalya Mihailova | 26 January 2015
On January 22, 2015, Sretensky Stavropegial Monastery in Moscow, Russia, hosted the forum "The Legacy of Patristic Tradition in the Monasticism of the Russian Church," part of the 23rd International Nativity Educational Readings. 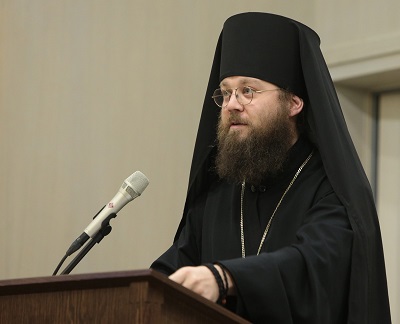 At the section titled “Divine Services as an Expression of Fundamental Monasticism,” Archimandrite Irinei (Steenberg) of St Tikhon of Zadonsk Church in San Francisco, CA, gave a lecture titled “The One Thing Needful,” on the meaning of Divine Liturgy in the life of a monastic brotherhood. He noted that the sole goal of monasticism is achieving communion in Christ. Divine Liturgy is the basis of daily life in a monastic community, the Mystery through which the Lord turns and monk towards Himself and offers him the fullness of life that he seeks. A monastic brotherhood must strive to form itself under the influence of Eucharistic life.