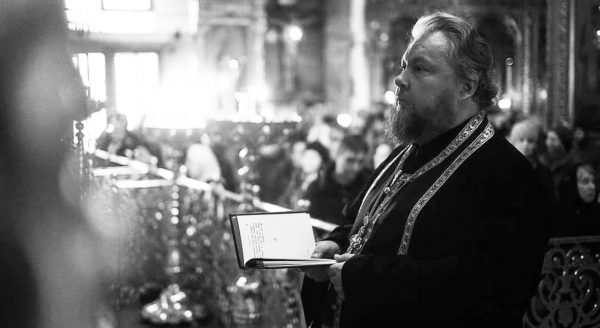 Archpriest Alexander Ageikin, Rector of the Epiphany Cathedral in Elokhovo, Moscow, died from coronavirus at the age of 48 on Tuesday, reports the official website of the Russian Orthodox Church.

“Father Alexander slipped into a coma around midnight and passed away in the morning,” reports Interfax.

Metropolitan Hilarion of Eastern America and New York sent his condolences in the following letter:

To His Holiness
Patriarch KIRILL of Moscow and All Russia,
To the Friends and Relatives of Protopriest Alexander Ageikin,
To the Clergy and Parishioners of Epiphany Cathedral in Elokhovo:

Your Holiness, Vladyko!
Dear in the Lord Fathers, Brothers and Sisters:
CHRIST IS RISEN!

I learned of the death of Protopriest Alexander Ageikin with heartfelt pain, for he was a faithful son and servant of the Church of Christ, and I hasten to express the condolences of the hierarchy, clergy and flock of the Russian Church Abroad, as well as my own personally, in the sorrow of Your Holiness, of his wife, children, relatives and friends of Fr Alexander, along with the clergymen, officials and worshipers of Epiphany Cathedral, wishing everyone the all-supporting aid of Christ the Giver of Life! Our fervent prayers, thoughts and empathy are with you all.

The Russian Church Abroad will never lose the good memories of the reposed as a dedicated servant before the Altar of the Lord, a person infused with the life of the Church, hospitable, a loving and beloved priest, husband and father. Even long before the formal dialog on reestablishing the fullness of unity between the Russian Orthodox Church and the Russian Orthodox Church Outside of Russia, Fr Alexander, as a cleric of Christ the Savior Cathedral, as well as its late sacristan Hegumen Iosif (Shaposhnikov), always warmly welcomed representatives of the clergy and laity of the Russian diaspora visiting the capital city of Russia and venerating its holy relics. Fr Alexander made several return visits to our dioceses, strengthening the fraternal bonds with members of our Church, who now pray for the repose of his soul and remember his labors, his sorrows, his humility and his prayers. It is worth noting that Fr Alexander, gradually ascending in service to the Church and meekly accepting the responsibilities laid up him by the hierarchy, never changed and never succumbed to vainglory.

May the All-Just and All-Blessed Lord, the Victor over Hades and death, remember the piety of the reposed in His Kingdom, his zealous service to His Holy Church, his devotion in the work of her adornment and reward him with the eternal crown of glory in His abodes!

With genuine empathy and love in the Risen Christ,

Metropolitan of Eastern America and New York,
First Hierarch of the Russian Orthodox Church Outside of Russia.