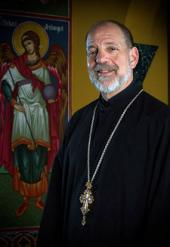 As we continue to mourn the loss of Metropolitan Philip, your prayers are requested for the repose of the soul of the newly-departed servant of God, the beloved Archpriest Alexander Atty. The V. Rev. Fr. Alexander, former Dean of St. Tikhon’s Seminary and before that priest at St. Michael Antiochian Orthodox Church in Louisville, KY, fell asleep in the Lord early Sunday morning March 23. May his memory be eternal!

Father Alexander held a B.S. in engineering from Philadelphia College of Textiles and Science. After earning his M.Div. at St. Vladimir’s Seminary in 1979, he was ordained a priest on December 9, 1979 at St. Nicholas Cathedral, Brooklyn, NY. Father Alexander was elevated to the rank of archpriest in 1988, and later went on to study at Pittsburgh Theological Seminary, earning his D.Min. in 2008.