Source: Byzantine, TX
Natalya Mihailova | 08 May 2014
The supreme patriarch of the Armenian Apostolic Church will meet Pope Francis on May 8. 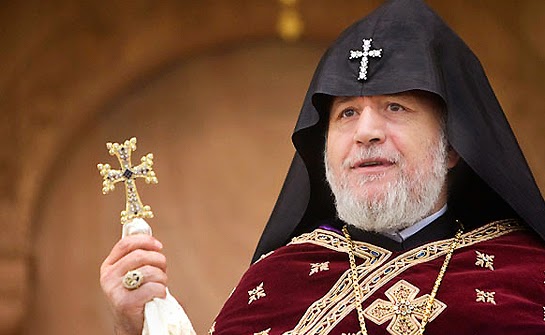 His Holiness Karekin II, head of the of the Catholicate of Etchmiadzin of the Armenian Apostolic Church, will visit Rome from 7 to 9 May to meet and pray together with the Pope.

Pope Francis and Karekin II, elected the 132nd Supreme Patriarch and Catholicos of all Armenians in 1999, will visit the Pontifical Council for Promoting Christian Unity and various other dicasteries of the Roman Curia.

They will visit the tomb of St. Peter and pray before the statue of St. Gregory the Illuminator, which is located on the north courtyard of the Vatican basilica.

During the Jubilee year 2000, the Catholicos Karekin II visited the Church of Rome. In 2001, Pope John Paul II paid a visit to the Catholicate of Etchmiadzin. The patriarch later headed the Armenian delegation during the funeral of John Paul II. Karekin II also met with Benedict XVI in 2008 and 2012, and was present during the inauguration of the Petrine ministry of Pope Francis.