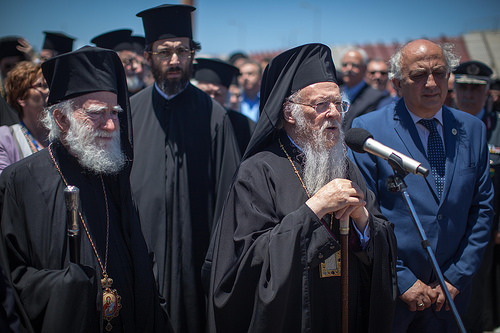 His All-Holiness Ecumenical Patriarch Bartholomew arrived today in Crete in order to convene, preside, and participate in the Holy and Great Council of the Orthodox Church, which will take place June 19-26 at the Orthodox Academy of Crete. Immediately prior to the beginning of the council, on June 17, His All-Holiness has called the Primates of the local autocephalous Churches to a Synaxis (a gathering), approved by all of the 14 Orthodox Churches, to discuss the agenda and work of the Council, and review the Council’s final message, which has been drafted by the special Pan-Orthodox drafting committee that will be referred to the council for revision and adoption.

Crete, which is part of the Church of Constantinople, received the Christian faith in the Apostolic period. For centuries, the Church of Crete has yielded countless martyrs, saints, faithful men and women. It is therefore an appropriate and significant setting for the Holy and Great Council. His All-Holiness arrived early in order to welcome and receive his brother hierarchs, the primates of the autocephalous Orthodox Churches together with their Churches’ delegations, but also to ensure that all necessary preparations have been made for the council. Assisting in this formidable labor of love are countless men and women from around the world, including many students and seminarians. The Pan-Orthodox Secretariat has worked feverishly, laying the groundwork for the numerous tasks that its members will collectively carry out during the Council. Words of encouragement and prayers are also being received daily from around the world. All eyes are focused on this island.

As convener of the council, His All-Holiness remains acutely aware of his particular ministry of presiding at the Holy and Great Council, and is also sensitive to the particular needs of each of his brother hierarchs of the sister Orthodox Churches that will assemble from far and wide. He is also ever-mindful of the expectations and aspirations of each of us, the faithful members of the Orthodox Church.

He called all to unity. May we respond with charity and generosity.