Source: The Antiochian Orthodox Christian Archdiocese of North America
April 16, 2015: From the Assembly of Canonical Orthodox Bishops of the United States of America
Natalya Mihailova | 19 April 2015 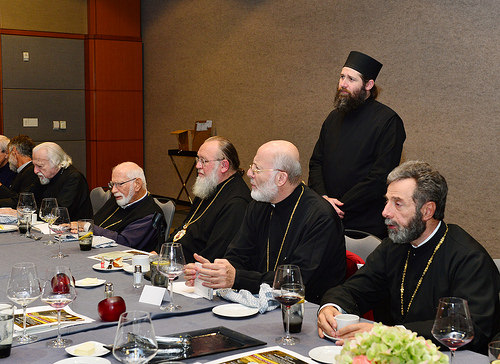 Can Orthodox weddings be celebrated on Saturdays? Are group confessions permissible? How are catechumens prepared for reception into the Church?

The answers to these questions and others depend on which Orthodox jurisdiction you call home. While there are vast areas of agreement in the Orthodox Church, there are variations in practice across jurisdictions in the United States as pertain to baptism, marriage, confession, and other sacraments of the Church.

As the Assembly of Canonical Orthodox Bishops of the United States of America strives to manifest the unity of Orthodoxy, it is necessary to develop a common understanding among its member bishops regarding pastoral practice.

Such is the goal of the Committee for Pastoral Practice (CPP), one of 14 Assembly committees. The CPP is responsible for identifying the differences and inconsistencies among the various jurisdictions in their exercise of sacramental and pastoral praxis and for proposing models for resolution consistent with canonical practice.

The Chairman of the committee is Metropolitan Joseph (AOCA). Its members are Bishop Sevastianos (GOA), Bishop Theodosy (ROCOR), and Bishop Mark (OCA). Seventeen consultants serve the committee as well as a facilitator and liaison.

“The work of this committee is very important,” said Metropolitan Joseph, “since it helps us to fulfill the command of St. Paul to the elders of the Church: ‘Take heed therefore unto yourselves, and to all the flock, over which the Holy Spirit has made you overseers, to feed the Church of God, which He has purchased with His own blood’ (Acts 20:28). This is the spirit with which we pursue this task, for the building up of the Holy Orthodox Church in this land.”

The first part of the committee’s task—identifying the practices currently in use and establishing comparative lists—has been completed. The committee began its work in 2011 by identifying 11 fields of pastoral practice to be surveyed. The committee requested, from each jurisdiction, the official written procedures for each of these fields. Analysis of the documents revealed that many jurisdictions have no centrally articulated, official, written policy for certain fields of pastoral practice.

With that information, the committee decided to focus on six areas where adequate documentary data could be gathered: baptism, chrismation and conversion; marriage; confession/communion; holy unction/anointing; funerals and memorials. A matrix of topics for each area of practice was developed and then a questionnaire sent to the chanceries of each member jurisdiction of the Assembly.

The committee now faces the final part of its assignment: where differences in practice do exist, to propose models for resolution that are consistent with canonical practice.

The committee recognizes and desires that each subcommittee should be as broadly representative as possible – a microcosm of American Orthodoxy. With that in mind, the subcommittees will consult with others to ensure that all opinions are represented.

One other outcome of the November meeting was the decision to simultaneously address the issue of infant loss (miscarriages) and infant ​death before baptism. In some churches, responses to these situations have been well developed, but universally accepted practices do not exist. A subcommittee on Pregnancy and Infant Loss met at Antiochian Village March 12-14, 2015 and is preparing a guide for clergy, addressing basic medical information, pastoral care, advocacy, and suggested prayers and services. The committee hopes to present the clergy guide to the full Assembly for review at its annual meeting in September 2015.